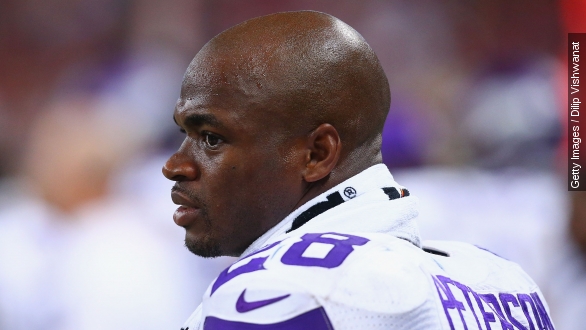 The NFL's decision to reinstate Minnesota Vikings running back Adrian Peterson marks the end of what was, essentially, the first case under the league's revamped personal conduct policy, which focuses on domestic abuse.

The initial policy was scrutinized after the Baltimore Ravens' Ray Rice punched his wife in February 2014. That incident, which was caught on camera, led to the league's most recent personal conduct controversy.

The NFL's subsequent punishment handed down to Rice — just two games — did not go over well.

"Have you considered resigning at any point?"

"I wonder if you, personally, have ever been involved in an abuse situation?"

"You suspended Ray Rice after our video. Why didn't you have the curiosity to go to the casino yourself?"

So, the league went back to the drawing board and came up with a minimum six-game ban for the first domestic abuse offense and a lifetime ban from the NFL for the second offense. Peterson — who was suspending for whipping his son with a switch — had been on Commissioner Roger Goodell's special exempt list. Peterson was suspended without pay, before being officially suspended for six games, or the remainder of the season in November.

One of the major criticisms against Goodell was his inconsistency with doling out punishment to players who misbehaved.

"Roger, you've had pretty extreme unilateral power in deciding discipline, but, as you've said a few times, you've gotten it wrong in a few cases. And that tends to happen when there are no checks and balances," CNN's Rachel Nichols said.

For that reason, the NFL divided the role of conduct czar between two people — who aren't Goodell: Lisa Friel, former prosecutor for the New York District Attorney's office, and Todd Jones, former director of the Bureau of Alcohol, Tobacco, Firearms and Explosives. (Video via NBC, PBS Newshour)

Friel and Jones could face their first real test as conduct officers in helping the league decide a punishment for another player, Cowboys defensive end Greg Hardy, for his role in a domestic violence incident in early 2014.

Hardy was initially accused of assault before the new policy was implemented, was found guilty after the policy went into affect, later appealed asking for a jury trial and finally had charges dismissed when prosecutors couldn't find the accuser. So now, he's considered innocent.

While the NFL has ruled it can't retroactively punish a player for an offense committed before the new policy went into effect, Dallas Morning News writer David Moore says Goodell and the NFL should still levy a six-game suspension and allow Hardy to appeal. That way, Goodell won't make the Rice mistake twice.

The NFL is expected to announce Hardy's punishment at the end of April. Meanwhile, Peterson will be reinstated to the NFL Friday.