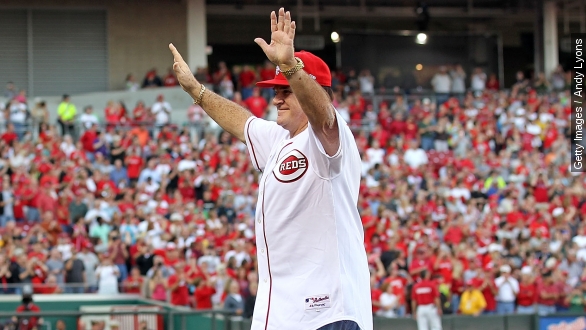 SMS
Pete Rose's Unofficial Reinstatement Into Baseball Begins
By Matt Moreno
By Matt Moreno
May 11, 2015
Pete Rose will make his appearance on Fox Sports as an analyst for the first time since signing with the network in April.
SHOW TRANSCRIPT

Some will see him as just another sports analyst, but Pete Rose's appearance on Fox Sports Monday will likely be a monumental one.

Monday will kick off Rose's sort of unofficial reinstatement into baseball.

The all-time hits leader is scheduled to appear on Fox Sports' for a segment at 5 p.m. EST and again for an hour long show starting a 7 p.m., his first appearances as an analyst since signing with the network in April.

The former Cincinnati Reds player and manager remained around the game ever since his lifetime ban in 1989 after allegations of betting on baseball, but 2015 could be his best chance to get back in it — officially. (Video via CNN)

Rose actually agreed to the lifetime ban in 1989, though it wasn't until years later that he admitted to gambling on baseball, although he says he always favored the Reds.

From an analyst side, Rose knows his baseball.

So it's just a matter of convincing people he's worth the time.

And that shouldn't be too tough. A Rasmussen poll released in April says 59% of baseball fans believe Pete Rose should be reinstated by Major League Baseball, taking him out of the dreaded MLB purgatory.

That's in line with an ESPN poll that found 81% of respondents wanted Pete Rose's banishment reversed.

The popular opinion will likely lead to overwhelming cheers for Rose when he makes an appearance in Cincinnati for the MLB All-Star game which first-year commissioner Rob Manfred is expected to attend.

The decision of whether to reinstate Pete Rose falls to Manfred who's said in the past he's going to consider it.

"I'll have to deal with that issue when it hits my desk," Manfred told ESPN before the season.

Now that Rose has filed a formal request with Manfred, that's exactly what he is doing.

Official reinstatement or not forthcoming, Rose will be in the public eye now more than ever and will one way or the other be back in baseball — unofficially at least.