PETA Protests Turkey-Eating By (What Else?) Going Naked 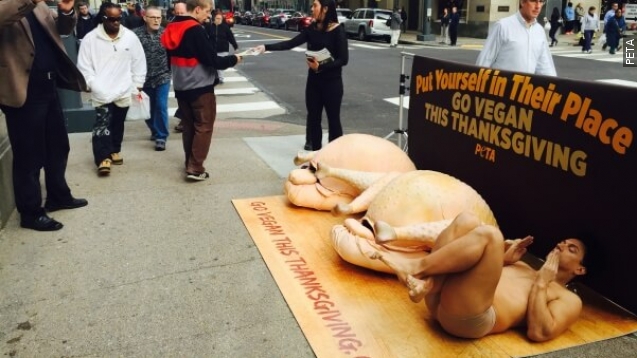 SMS
PETA Protests Turkey-Eating By (What Else?) Going Naked
By Melissa Prax
By Melissa Prax
November 26, 2015
PETA protested the consumption of turkeys on Thanksgiving Day by having supporters strip down and pose as raw turkeys themselves.
SHOW TRANSCRIPT

People for the Ethical Treatment of Animals urged consumers to "put yourself in their place," referring to the turkeys on many families' tables at Thanksgiving.

And they didn't just ask; they demonstrated. In Baltimore and Pittsburgh, seemingly naked protesters posed like frozen turkeys on large cutting boards next to fake raw turkeys.

Along with the protests, a message that "billions of animals have their bodies chopped up, labeled, and wrapped in cellophane for the supermarket meat case."

PETA has used naked or barely clothed protesters in the past to speak out against the treatment of animals that are slaughtered for food or fashion.

But do these protests actually work? After all, it's not like the Thanksgiving turkey is going away.

While there's not a lot to say if the protests are or aren't effective, some criticize the group for using "sex sells" tactics to get awareness, and others question whether the attention PETA gets is less about the message and more about the naked people.