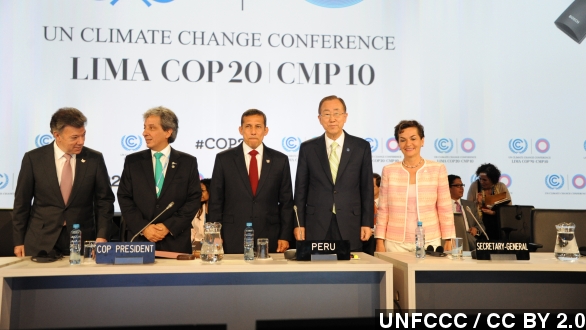 The hugely-important two-week United Nations climate summit in Peru is one day into overtime, and negotiators are still scrambling to reach a deal.

Representatives from 190 countries and over 4,000 NGOs have been talking in Lima, Peru since Dec. 1. It's the 20th Conference of Parties for the U.N.'s Framework on Climate Change.

The talks were expected to produce a global blueprint for tackling the problems of climate change. But that outcome is in jeopardy, as the group of nations splits among depressingly familiar lines.

The main squabbles in the summit are between rich and poor nations. Wealthy nations are eager to have the rest of the world shoulder more of the burden, but undeveloped countries say they're not getting enough out of the current deal.

A big sticking point is compensation; so far, world leaders have pledged $10 billion for a fund to help poor countries switch to green technologies. That's under the $15 billion that was expected to come out of this summit, and a long way from the $100 billion promised by 2020.

Developing countries are also balking at a new push by industrialized nations such as the U.S. to make sure all countries commit to slashing emissions. Emerging economies like China and India have thus far been exempt from such measures.

U.S. Secretary of State John Kerry addressed the conference Friday, saying, "If you're a big developed nation and you're not helping to lead, then you're part of the problem."

And rich countries are similarly unhappy with the push for compensation for poor countries, particularly small island nations, who've suffered the effects of severe weather made worse by climate change.

The ability of negotiators to reach an agreement in Lima will likely set the tone for the next big climate summit in Paris in 2015.

This video includes images from UNFCCC / CC BY 2.0.