People (Legally) Flaunt Their Guns On The Streets Of Cleveland 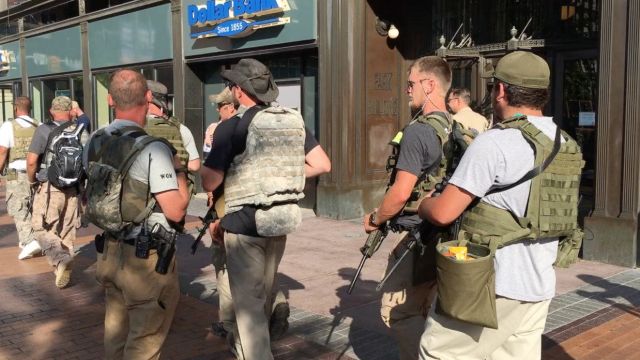 These West Ohio Minutemen took to the streets of Cleveland on Monday afternoon.

The men had guns and wore bulletproof vests — but they weren't breaking any laws.

Ohio is an open-carry state. Legal gun owners can have certain handguns, long guns or shotguns in public pretty much whenever they want.

But in the wake of recent deadly attacks on law enforcement, Cleveland's largest police union tried to change that.

Ultimately, it failed and many people around Cleveland are exercising their Second Amendment right.

We should note: No firearms are allowed within a small "secure zone" in Cleveland. So far, protests in the city have remained peaceful.

This video includes clips from WEWS and KTVT and images from Getty Images. Music provided courtesy of APM Music.