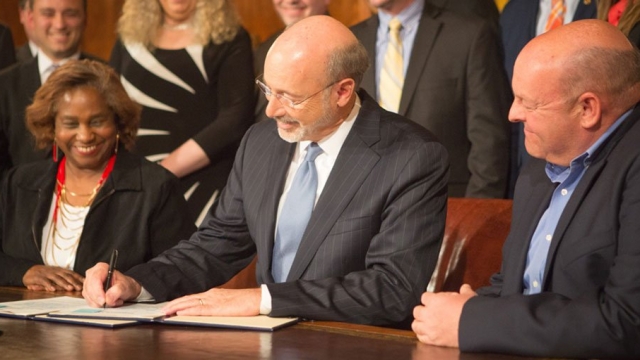 Pennsylvania Gov. Tom Wolf signed two executive orders Thursday to protect members of the LGBT community. Both say no agency "under the governor's jurisdiction can discriminate on the basis of sexual orientation, gender expression and identity."

"We need to understand that a future that does not take nondiscrimination seriously is a poor future indeed. We can and we should in Pennsylvania do better," Wolf said at the press conference before signing the orders.

The Human Rights Campaign's president praised Wolf's action, saying, "All Pennsylvanians deserve to be able to live, work and thrive in their communities free from unfair and unjust discrimination."

The executive orders come as the Pennsylvania Fairness Act is stuck in the state's assembly; it would include LGBT as a protected class against discrimination. The Pennsylvania Family Institute is telling people to protest the act, saying it would violate privacy in bathrooms. According to HRC, 78 percent of Pennsylvanians support updating that nondiscrimination law.

In a statement, the governor called out other states for recent laws that many say would allow discrimination against members of the LGBT community.

Last week, North Carolina's governor signed a bill requiring transgender people to use bathrooms that match the gender on their birth certificates. And this week, Mississippi's governor signed a "religious liberty" bill allowing services to be declined if serving someone violates religious beliefs.

The governor's office says this is just a first step, and "he will continue to fight for nondiscrimination legislation" in Pennsylvania.