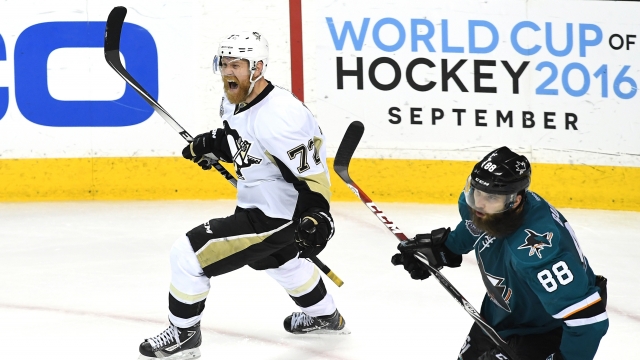 SMS
Penguins Win The Stanley Cup With Dominating Defense
By Ryan Biek
By Ryan Biek
June 13, 2016
The Pittsburgh Penguins ended their seven-year drought with a win over the San Jose Sharks in Game 6 of the Stanley Cup finals.
SHOW TRANSCRIPT

During most of the regular season, the Penguins hardly looked like a championship-caliber team. Six months ago, they were in the middle of their division's standings, having replaced head coach Mike Johnston with Mike Sullivan.

Yet, even after the ship had been righted by the finals, the Penguins were without several veterans, including defenseman Trevor Daley and forward Pascal Dupuis.

Rookies like goalie Matt Murray stepped up, though, for what was a dominating defensive performance in Sunday night's game.

Defenseman Kris Letang scored off a quick pass from Sidney Crosby in the second period to put the Penguins in the lead. During the final period, the Sharks only managed to put two shots on goal.

Star player Crosby was named playoff MVP. He became only the third player in NHL history to win the honor despite not having a goal in the Stanley Cup final.