Mike Pence Won The VP Debate, But Donald Trump Might Not Be Too Happy 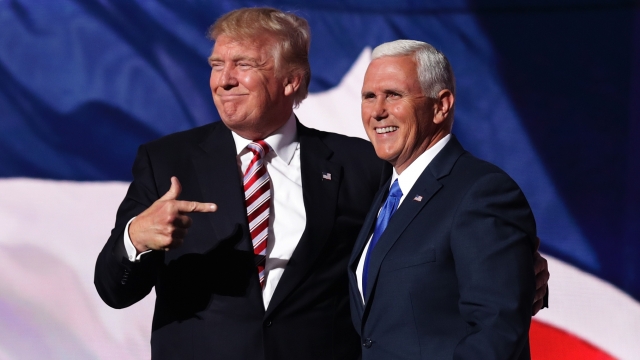 SMS
Mike Pence Won The VP Debate, But Donald Trump Might Not Be Too Happy
By Briana Koeneman
By Briana Koeneman
October 5, 2016
Some are speculating it's because Pence did a much better job at his debate than Trump did at the presidential debate last week.
SHOW TRANSCRIPT

"Senator, you and Hillary Clinton would know a lot about an insult-driven campaign. It really is remarkable," Mike Pence said.

The results are in, and the general consensus is that Gov. Mike Pence won Tuesday's vice presidential debate.

After the debate, commentators said Pence appeared solid, calm and effective, while Sen. Tim Kaine seemed like he was "trying too hard" for most of the event.

And, according to a CNN/ORC poll, American voters agree. Forty-eight percent who watched the debate thought Pence came out on top, compared to 42 percent who thought Kaine did better.

SEE MORE: The GOP Said Mike Pence Won The Debate Before It Even Started

So why would Trump be upset over results like those?

Well, some are speculating it's because Pence did a much better job at his debate than Trump did at the presidential debate last week.

"Crime has continued to drop, including murders. So there is ... " Hillary Clinton said.

"No, you're wrong. You're wrong," Donald Trump interrupted.

"Murders are up. All right, you check it," Trump said.

And, as many media outlets pointed out, Pence wasn't so great when it came to defending Trump. But the campaign denied any hard feelings between the two.

Fortunately for Trump, he'll have another chance to impress voters during the second presidential debate on Oct. 9.