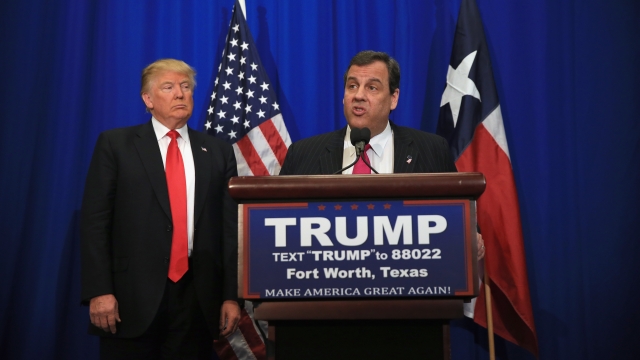 Chris Christie is out, and Mike Pence is in. The New Jersey governor will no longer head Donald Trump's transition team into the White House.

And it's reportedly due — at least in part — to a feud between Christie and a Trump family member.

The announcement of Christie's demotion came on Friday. He will now serve as one of many vice chairs on the transition force.

And Politico reports a spat between the governor and Trump's son-in-law Jared Kushner might have sparked the sudden switch.

A spokesperson for the Trump team suggested Trump's seriousness about "changing Washington" might "ruffle the delicate sensitivities" of some seasoned politicians.

Once source told the outlet, "Everyone has the knives out for each other."

But it's more than just Kushner and Christie not getting along. The team has had some friction for much of the campaign.

Reports suggest some of the tensions have come from rumors that Trump's initial campaign manager Corey Lewandowski is being considered as chairman of the Republican National Committee.

And keep in mind Christie is still dealing with the aftermath of the Bridgegate scandal. Some have speculated that could have contributed to Pence taking over.

Although Christie himself wasn't formally charged, two of his former allies were. Bridget Anne Kelly and Bill Baroni were found guilty in connection with lane closures on the George Washington Bridge that connects New Jersey and New York. The pair are accused of conspiring against the mayor of Fort Lee, New Jersey, for not endorsing Christie's re-election bid.

Christie's removal as transition team head isn't the only change to the team. RNC chairman Reince Priebus, campaign CEO Steve Bannon and three of Trump's children have all been added to the team.