Peggy Knobloch Went Missing In 2001; Have Police Found Her Remains? 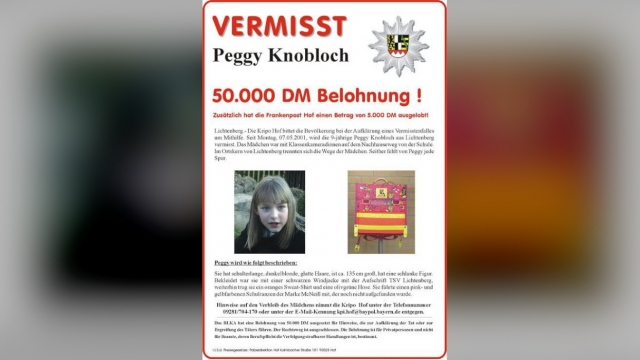 A German mushroom forager reportedly found remains that could be those of a 9-year-old girl who went missing 15 years ago.

The Bavarian prosecutor told the BBC the man found bones that "most probably" belong to Peggy Knobloch.

Knobloch went missing when she didn't come home from school in May 2001. Hundreds of law enforcement officers searched for the girl for weeks, even extending their search into the Czech Republic and Turkey.

The remains believed to be Knobloch's were reportedly found less than 10 miles away from her home.

According to The Telegraph, Knobloch's mother was able to identify a piece of jewelry found near the remains — a watch the little girl was wearing the day she disappeared.

This recent development is probably one of the first since a man accused of her murder was released from prison. That man, who had a learning disability, confessed to killing the girl but later withdrew his confession.

Authorities initially believed the man had killed Knobloch to hide the fact he'd sexually abused her. It was later found that he'd been questioned more than 40 times without a lawyer present and only confessed while under duress. He spent a decade in prison before his release.

Investigators plan to perform DNA tests on the remains before saying definitively they are Knobloch's.

Knobloch had been dubbed the German Madeleine McCann, likening Knobloch's case to that of an English girl who went missing while she was with her parents in Portugal. McCann's remains were never found.

This video includes images from Getty Images and clips from Bayerischer Rundfunk and TV Bayern Media.