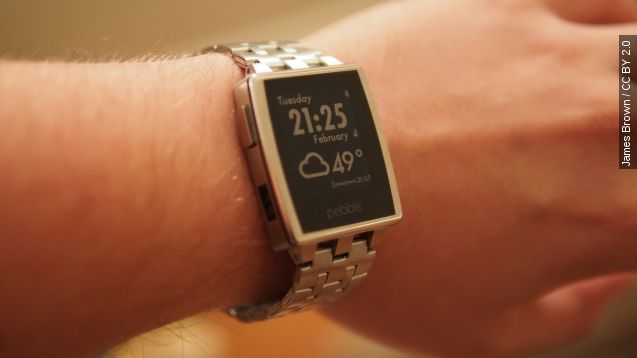 Pebble's new wearables are shipping to consumers. (Video via Pebble)

Reviews are rolling in, and — for the most part — they're positive. (Video via CNET)

"I like the Pebble Time. I'm not absolutely head-over-heels in love with it," a CNET reviewer said.

But there's one big problem: The new Pebble Time watches don't have an app that supports the iPhone. (Video via Apple)

I know, right? What's the point of having a wearable if it doesn't communicate with your smartphone? It might as well just be a watch. (Video via 20th Century Fox / "The Internship")

It's not completely clear which company is to blame. Pebble said on its Kickstarter page: "We're doing all we can to mitigate the delay and make Pebble Time Watch for iPhone available for download."

Pebble even included a screenshot of its iOS app's submission log. The current status is "in review," and it's dated May 23. So, now we're wondering — is Apple delaying the app on purpose?

Apple launched its own wearable — the Apple Watch — earlier this year, so it is possible the company could be giving priority to its own device. But that seems a little childish. (Video via Apple)

PC Magazine asked Apple for comment on the matter, and so far, they've received no response.

It's also possible the app updates Pebble submitted had some real bugs that need fixing — but if that's the case, Pebble hasn't said so.

Either way, this is just plain weird. And it's making Pebble purchasers upset — they've taken to Twitter and are using #FreeOurPebbleTime to gently push Apple to give the app a green light.