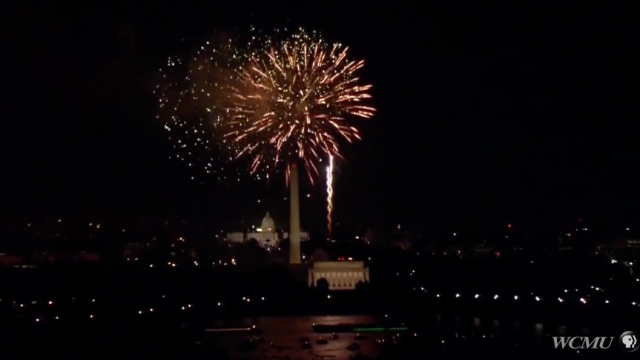 SMS
PBS' Live July 4th Fireworks Show Was Actually Kind Of A Rip-Off
By Matt Moreno
By Matt Moreno
July 5, 2016
PBS' live Fourth of July show was supposed to be capped off with a marvelous display of fireworks. Mother Nature had other ideas.
SHOW TRANSCRIPT

It looks like PBS' "live" feed of fireworks from Washington, D.C., on Monday wasn't completely live.

The network's "A Capitol Fourth" Independence Day show was supposed to be a star-studded event capped off with a fantastic display of fireworks.

The problem? The weather in D.C. didn't want to cooperate.

Most of D.C. was overcast and foggy, and the marvelous display of fireworks was partially swallowed up by the cloudy night sky.

That's when PBS execs decided to take action and splice in some footage of last year's fireworks — and viewers noticed.

After getting called out on social media about it, the outlet posted: "With the weather being overcast we showed a combination of the best fireworks from this year and previous years. It was the patriotic thing to do."

But PBS' "patriotic" decision got some mixed reviews.

Some viewers said they were fine with it, writing that the live fireworks would have been hard to see with all the clouds in the sky.

Others felt a bit cheated. One Twitter user said: "@July4thPBS How is using stock video patriotic? If I wanted that, I'd watch YouTube. #fake #July4thPBS"

After the show, PBS issued a longer statement saying, in part, "We apologize for any confusion this may have caused."

Washington, D.C., is consistently ranked as one of the top cities to celebrate the nation's independence. For PBS' sake, hopefully the weather will decide to cooperate a little bit better next year.