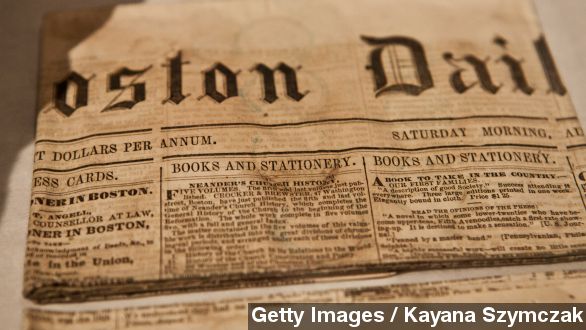 It only took 220 years, but a time capsule buried by American patriot Paul Revere, Founding Father Samuel Adams and Colonel William Scollay in 1795 has been opened.

Although the box was found Dec. 11 in a cornerstone of the Massachusetts State House, it was just revealed to the public Tuesday and opened at the Museum of Fine Arts. And there was one very important member of the Revere family there to see it, too, Paul Revere IV. (Video via WHDH)

"I mean, we're a pretty forward looking city, but we get to remember our old stuff," Paul Revere IV says.

As for the super old goodies inside, there were coins that are hundreds of years old, the front pages of five newspapers and a silver plate marking the day the box was buried, along with the inscription: “July 4, 1795, the 20th anniversary of America’s independence." Neat, right?

"Perhaps the most significant artifacts were at the bottom of the brass box," a CBS reporter says.

"A pine tree shilling from 1652 is right there," another observer says.

"The shilling was a coin minted by the Massachusetts colony in defiance of the British parliament," the reporter says.

As for those newspapers, no one can read them just yet, as they can't be unfolded.

Boston.com reports paper conservationists will have to see what sort of condition they're in to determine whether they can be unfolded.

The box was discovered and reburied in 1855, something researchers figured out when coins from that year were also found inside the box.

The capsule was placed in the cornerstone of the Mass. State House during its construction 1795.

And has been dubbed the "oldest time capsule" in the U.S.

Conservator Pam Hatchfield said this is the most exciting discovery she's ever been able to work on. Pretty big deal, since Boston Magazine says she has extracted things from ancient Egyptian ruins that are 4,000 years old.

This is the second time capsule to be discovered within a few months. In Boston's Old State House in October, another time capsule from 1901 was found inside the head of a golden lion statue.