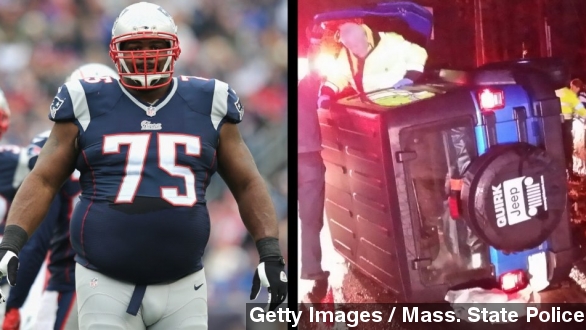 Patriots defensive tackle Vince Wilfork is known to be clutch after 11 seasons in the NFL. Luckily for one woman, he's clutch off the field, too.

Massachusetts State Police say a woman was driving home after attending the Patriots' AFC Championship game when she crashed her Jeep, rolling it and leaving her trapped.

The crash happened just as Wilfork was making his way back from the game. Police say they're thankful he turned around to help.

"Vince Wilfork, as most people realize, is a very large man. He reached down inside the vehicle and scooped the woman right out of the vehicle. Something that in many years of experience with rollovers takes a lot longer, he was able to do with one hand," said Trooper Matthew Guarino of the Massachusetts State Police via NECN.

WFXT says the woman, a Patriots season ticket holder, didn't realize it was Wilfork who helped her until police told her about it. WBZ-TV added this tidbit from the woman.

"The driver of this vehicle told state troopers that, ironically, she was just about to buy a vince Wilfork jersey earlier at the game from a vendor," WBZ-TV reporter Nicole Jacobs said.

If she didn't buy it that night, we're sure she'll look into a Wilfork jersey now. Police say the woman behind of the wheel of the Jeep had no major injuries, but officers did arrest her on suspicion of driving drunk.

This video includes images from Getty Images and the Massachusetts State Police.