Patriots' Answers About 'Deflate-Gate' Don't Tell Us Much 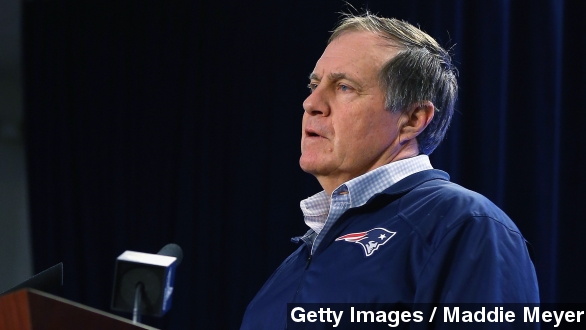 SMS
Patriots' Answers About 'Deflate-Gate' Don't Tell Us Much
By Matt Moreno
By Matt Moreno
January 22, 2015
Bill Belichick and Tom Brady acknowledged the NFL "deflate-gate" investigation, but they didn't really expand on it.
SHOW TRANSCRIPT

We have got ourselves a mystery. Someone somewhere probably deflated 11 of 12 of the New England Patriots footballs for the AFC Championship game. Only thing is, two possibly suspects in the case, head coach Bill Belichick and quarterback Tom Brady, don't have a clue.

"I've told you everything I know. ... I've told them everything I know. There's nothing else I can add to it. ... I have no explanation for what happened. ... Tom's personal preferences on his footballs is something he can talk about," Belichick said via WFXT.

"...Nobody did anything wrong?," a reporter asked.

"Yeah! I'm very comfortable saying that nobody did it — as far as I know. I don't know everything. I was in the lockeroom preparing for a game. I don't know what happened," Brady said.

"Deflate-gate" first started Sunday night after the Patriots' 45-7 win over the Indianapolis Colts.

Indianapolis news station WTHR first reported Sunday the league might be looking into if the Patriots used deflated footballs during the game.

Then the NFL confirmed the investigation Monday, triggering plenty of speculation, theories, name-calling and much, much more.

Come Tuesday, ESPN reported the NFL found 11 of the 12 footballs used by the Patriots offense had been deflated by 2 pounds per square inch.

Under NFL regulations, a game ball must be inflated between 12.5 to 13.5 psi. Each team prepares 12 balls for their offense, with the home team providing up to 36 for an outdoor game.

A deflated football can be easier to catch, throw, hold onto and more — especially in bad weather. Which is exactly what the Patriots and Colts were dealing with in the first half on Sunday.

But when Patriots quarterback Tom Brady was asked about the possibly deflated footballs on his weekly WEEI radio appearance Monday, he laughed it off, saying: "I think I've heard it all at this point. ... It's ridiculous."

The mystery of deflate-gate continues ...