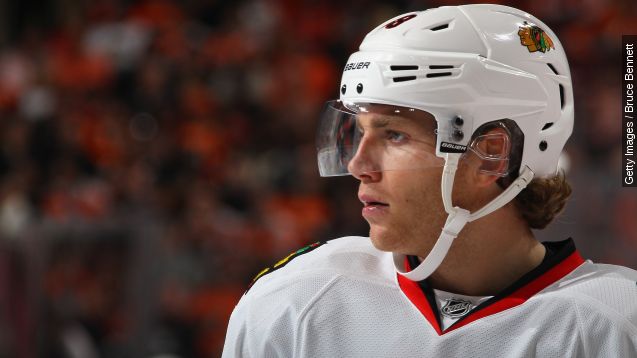 SMS
Patrick Kane Accuser No Longer Cooperating In Rape Case
By Matt Moreno
By Matt Moreno
November 3, 2015
The Buffalo News reports that Kane's accuser said she might drop the allegations against the Chicago Blackhawks star. She cited stress as a reason.
SHOW TRANSCRIPT

The rape case against Chicago Blackhawks forward Patrick Kane appears to be nearing an end as the accuser is reportedly no longer cooperating.

One source told The Buffalo News Kane's accuser is "no longer interested in going forward" with the case. Several other sources told the outlet that she's citing the stress from the high-profile case as the main reason.

The incident in question dates back to early August when the accuser said she met Kane at a bar before she and a friend went back to his home in Hamburg, New York. That's where the accuser says Kane raped her, leaving her with bite and scratch marks.

The case took a strange turn in September when the mother of the alleged victim said the hospital evidence bag was placed on her doorstep.

The accuser's attorney later walked back those claims and resigned from the case days after.

Since the beginning of the case, Kane hasn't missed any ice time. He was never suspended by the NHL or the Blackhawks, and now that the case could be dropped, it doesn't look like he will be.

Kane's been a key player for the Blackhawks franchise, which has won three of the last six Stanley Cups, and this year is no different. He's among the league leaders in goals, assists and points.