Past And Present: Syria's Heritage Vs. Syria's People 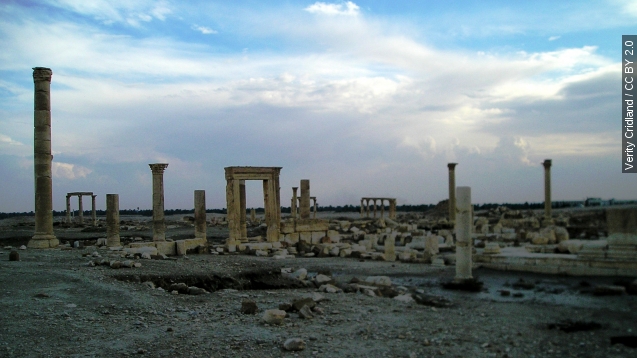 SMS
Past And Present: Syria's Heritage Vs. Syria's People
By Steven Sparkman
By Steven Sparkman
May 21, 2015
In decrying Palmyra's fall to ISIS, the international community is being accused of caring more about ruins and statues than about people.
SHOW TRANSCRIPT

With the news that ISIS — with its fondness for destroying ancient ruins — had taken control of the ancient city of Palmyra, the immediate question became, "Will the group bulldoze yet another world heritage site?"

"Fears growing of what will happen now to the ancient ruins there," Fox News reported.

"It's an absolute tragedy to see this city ... which has stood for millennia, which could be witnessing its final hours," MSNBC's Richard Engel said.

It's not something we think about very often, but the idea that ancient historical sites belong to all humanity is so ingrained that the videos we've seen this year of vandals smashing ruins, destroying statues and even dynamiting ancient cities have lead to an emotional, sometimes visceral, reaction.

"How proud they are of what they're doing," Channel 4's Lindsey Hilsum said.

"There is a whole other psychic category for the terribleness of the loss when very valuable things, irreplaceable things, are lost because of a deliberate decision to destroy them," MSNBC's Rachel Maddow said.

But with Palmyra, we're starting to see some pushback from those with another perspective: that too much attention is being paid to ruins while people are being killed.

"This is partly why the world is paying attention to this," CBC's Heather Hiscox said.

Buried in many of the articles reporting on ISIS's capture of the ancient city are quotes from residents expressing a sense of betrayal.

CNN quotes one Syrian resident saying, "The world does not care about us. ... All they are interested in is the stones of ancient Palmyra."

And The Financial Times asked a local activist about ancient artifacts only to be told, "Why does the world only care about ruins, and not the blood of our people?"

It's a long-running debate. When the Taliban blew up the giant Buddhas of Bamiyan in 2001, a spokesperson accused the West of hypocrisy for ignoring mass starvation in Afghanistan. (Video via BBC)

"If your country is destroying our future with economic sanctions, how do they worry about our heritage?" Sayed Rahmatullah Hashimi told Charlie Rose.

“They use it to tell the local population, 'Well, they're reacting to the destruction of these ancient idols, but do they really care about you, or your local mosque or these other issues that are affecting your life right now?'"

Archaeologists and antiquities experts have tried to answer the critics by admitting that the human tragedy is obviously worse, but that the destruction of historical sites deserves at least some of our attention.

"In comparison to the immediate horror of people being murdered and raped and tortured, this is a secondary issue," art expert Thomas Campbell told CNN.

"I think, rightly so, we have to focus on the human tragedy. But I think it's trivial to say we're talking about the destruction of a few pretty stones. ... Culture is not reduced to a few stones, it doesn't grow back," archaeologist Clemens Reichel told CBC.

And it's worth pointing out that Iraqis, not just Westerners, were among the fiercest critics of the destruction in Mosul and Nimrud.

"As Iraqis and as archaeologists, the destruction by ISIL of heritage sites made our hearts bleed," Babylon ruins director Hussien Flailh Khalily told Al Jazeera.

Iraqis are even reported to have fought off an ISIS attack on Mosul's famous leaning minaret, and when the group blew up the tomb of the prophet Jonah, The New York Times quoted locals as saying, "We were crying when they detonated it. ... We couldn't believe that the history of Mosul has disappeared. I wanted to die." (Video via BBC)

But it's hard to argue that the loss of life in Syria and Iraq gets the appropriate amount of media attention. There were far more headlines Thursday about the ruins of Palmyra than about the hundreds killed in the fighting or the more than a dozen people executed by ISIS.

And it's possible the media attention has made Palmyra a more inviting target. Originally, experts say ISIS destroyed ruins to attract other extremist Muslims, and angering the group's enemies was a side effect. But if provocation wasn't the point before, it may be now. (Translation via the Middle East Media Research Institute)

After the intense backlash against the destruction of the Mosul museum, the group bragged in its official magazine that the vandalism "had also served to enrage the [infidels], a deed that in itself is beloved to Allah."

It's not clear whether ISIS has the capability to destroy Palmyra immediately, especially considering the sheer size of the city. But it will be difficult to take the area back, because the main force fighting ISIS in the region is the military of Syrian president Bashar al-Assad.

This video includes images from yeowatzup / CC BY 2.0, Varun Shiv Kapur / CC BY 2.0 and the Library of Congress and music by Chris Zabriskie / CC BY 4.0​.