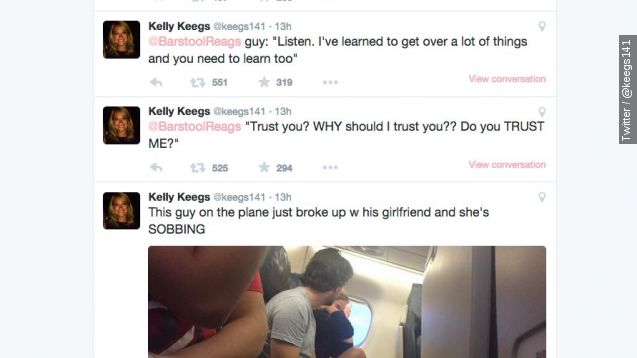 SMS
Passenger Live Tweets Couple's Awkward Breakup On Airplane
By Matt Moreno
By Matt Moreno
August 24, 2015
A breakup on a delayed flight out of Raleigh, NC, made for some interesting entertainment for passengers — and Twitter.
SHOW TRANSCRIPT

There's a lot of awful ways to break up with your boyfriend or girlfriend. There's the text message breakup, the Twitter breakup ... the Facebook relationship status change breakup?!

But an airplane has got to be one of the worst possible places to break up. That was the case, though, on a delayed flight in Raleigh, North Carolina. Luckily, another passenger live tweeted the entirety of the awkwardness.

All of this on what was supposed to be a simple 50-minute flight. We're guessing alcohol may have played a part.

And they said this flight wasn't going to have an in-flight movie ...

Kelly Keegs, the woman who captured it all, got quite the kick out of the whole thing, calling it the greatest flight delay ever. The story even fueled the hashtag #PlaneBreakup to start trending.

So here's some advice to make sure your breakup story doesn't end up on your Twitter timeline.

And a relationship therapist tells Women's Health to break up in person. "Make plans with your partner to talk in a private area, like his place, where you're both able to express your emotions freely. In other words, don't go out to dinner." Or probably on a plane for that matter.

We don't know the identity of the anonymous plane breakup exes and that's probably for the best. We at least hope things worked out — one way or the other.

This video includes images from Getty Images and Satish Krishnamurthy / CC BY 2.0.