Parking Dispute Might Have Set Off Waco Biker Shootout 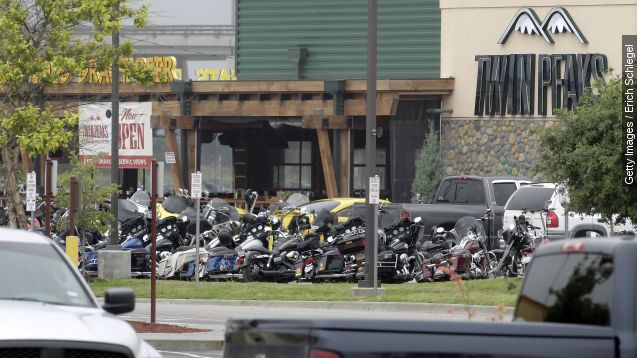 A deadly biker gang shootout in Waco, Texas that left nine dead and resulted in more than 170 arrests may have been sparked by a parking dispute, new reports suggest.

On Monday, The Dallas Morning News reported that investigators are pursuing a lead that some sort of parking dispute eventually led to the fatal shootout at Twin Peaks on Sunday.

Since the shooting, the Waco Police Department has arrested 172 people on organized crime charges. The Twin Peaks restaurant where the incident took place has also been closed for a week by the local Alcoholic Beverage Commission. (Video via KDFW)

In a statement on Facebook, an operating partner for the Twin Peaks Waco franchise claims the restaurant has had "ongoing and positive communications with the police," but Sgt. Swanton says that is not the case and that Twin Peaks management wanted the biker gangs at their restaurant. (Video via ABC)

In all, an additional 18 people were injured during the shootout.