At Least 100 Killed In Paris After Multiple Violent Attacks 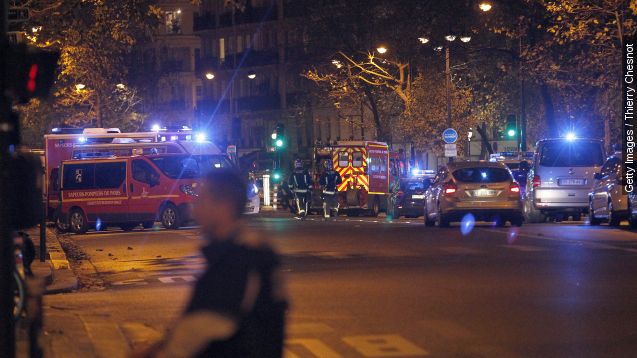 SMS
At Least 100 Killed In Paris After Multiple Violent Attacks
By Matt Picht
By Matt Picht
November 13, 2015
Dozens of people have been killed in a series of attacks in Paris Friday. Police haven't said if the attacks are connected.
SHOW TRANSCRIPT

President Obama told reporters "This is an attack, not just on Paris, an attack not just on the people of France, but an attack on humanity and all the universal values we share."

A series of attacks left at least 100 people dead in Paris on Friday.

Much of the violence happened at Bataclan art gallery, where armed men attacked an ongoing heavy metal concert and took hostages. Officials say a police raid on the gallery killed two of the suspected attackers.

Unidentified gunmen opened fire with an automatic weapon at multiple locations in downtown Paris. Several explosions, including 2 suicide attacks, were reported near the Stade de France stadium, which was hosting a France vs. Germany soccer match at the time.

France, and Paris in particular, has been on high alert for terrorist attacks since the Charlie Hebdo shootings in January. The city was scheduled to hold a global summit on climate change in a few weeks.

French president Francois Hollande announced France was closing its borders and entering a state of emergency. Authorities haven't yet commented on whether the attacks are linked in any way.