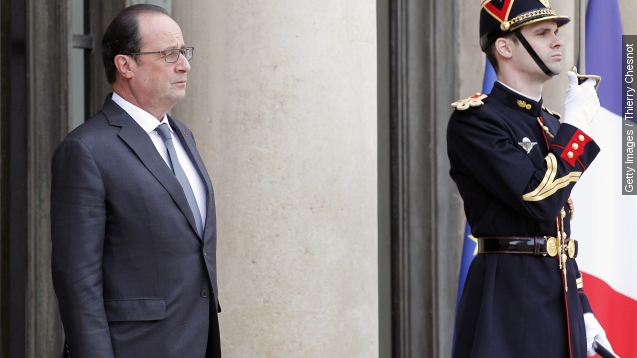 SMS
Paris Attacks Could Turn France From Ally To Leader In War On ISIS
By Sebastian Martinez
By Sebastian Martinez
November 16, 2015
French President Francois Hollande has pledged a "merciless" response to the terrorist attacks in Paris, but how far will France actually go?
SHOW TRANSCRIPT

"We will lead the fight, and it will be merciless," French President Francois Hollande pledged in the wake of the Paris terror attacks. (Video via France 2)

France says it will be merciless in its fight against ISIS, which has claimed responsibility for the Paris terror attacks that left more than 120 people dead and hundreds more injured. (Video via Voice of America)

But to get an idea of what that response might look like, it's worth examining France's response to another major terror attack.

After the Sept. 11 attacks in 2001, then-French President Jacques Chirac was supportive. (Video via NBC)

But while he pledged solidarity, he also cautioned that military force wasn't the only way the U.S. could respond.

Nevertheless, when the U.S. moved into Afghanistan, it did so with French support: Over the course of the war, the country committed more than 3,000 soldiers, 88 of whom died, as well as air and naval support. (Video via ABC, France 24)

"France is not pacifist. ... But we just feel that there is another option, another way, a less dramatic way than war, and that we have to go through that path. And we should pursue it until we've come [to] a dead end, but that isn't the case," he told CBS in 2003.

Two years later, when the situation in Iraq rolled around, France was famously vocal in its opposition, pushing for continued international inspections and warning conflict could destabilize the region. (Video via CBS, United Nations)

In both cases, popular opinion was against military intervention, but that doesn't seem to be the case with Syria.

Even before the most recent Paris attacks, French public opinion favored military intervention in Syria, including ground troops, likely driven by the Charlie Hebdo shootings and other terror attacks in the country. (Video via French Ministry of Defense)

And with France launching increased air strikes in Syria, it seems more military intervention is exactly what they're getting. (Video via French Air Force)