Paris Attack Suspect Turns Himself In As Manhunt Continues 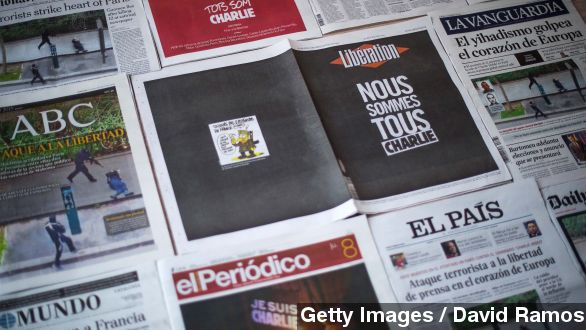 SMS
Paris Attack Suspect Turns Himself In As Manhunt Continues
By Jake Godin
By Jake Godin
January 8, 2015
One of the suspects in the Paris terrorist attack on Wednesday has turned himself in as the manhunt for the chief suspects continues.
SHOW TRANSCRIPT

One of the three suspects police believe helped carry out Wednesday’s terrorist attack in Paris has turned himself in.

According to French news channel i>TELE, the 18-year-old Hamyd Mourad turned himself in after seeing his name circulate as one of the suspects. He claims he is innocent and was at school during the time of the shooting.

The two other suspects, Chérif and Said Kouachi, remain at large but are thought to have held up a gas station about 50 miles northeast of Paris. They were last seen driving back in the direction of the capital.

Prime Minister Manuel Valls said on Thursday that “several” arrests had been made overnight in connection to the suspects, but warned of the brothers, “They are still free, they are heavily armed, so we can be afraid of further violence.”

The BBC says there were seven arrests in total, taking place in Reims, Charleville-Mezieres and near Paris.

While the manhunt for the Kouachi brothers continues, there have been separate incidents of violence throughout France.

In one, a bystander was injured and a French policewoman killed during a shooting in southern Paris Thursday morning. The man reportedly had an automatic rifle and a flak jacket.

But Interior Minister Bernard Cazeneuve cautioned not to jump to any conclusions by linking that shooting with yesterday’s terrorist attack.

There are fears Wednesday's attacks have led to a backlash against Muslims in France. Reports of a bomb blast by a mosque near the city of Lyon in southeastern France appeared along with attacks on mosques in other cities as well.

Charlie Hebdo says it will continue the publication of its paper by printing a million copies instead of the usual 60,000 next Wednesday.

At 11 a.m. Central European Time Thursday morning, thousands participated in a minute of silence in memory of those who died yesterday.