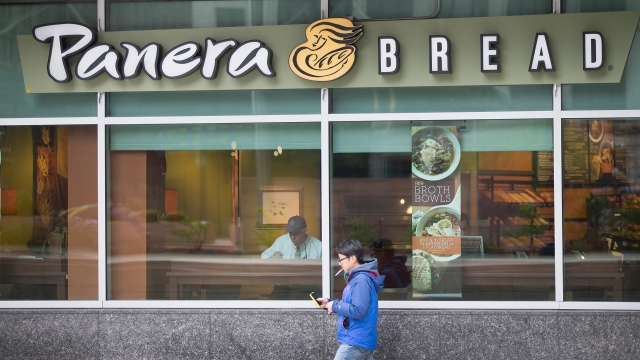 SMS
Parents Sue Panera For Peanut Butter On Daughter's Grilled Cheese
By Lauren Stephenson
By Lauren Stephenson
June 6, 2016
They ordered a grilled cheese and wrote on the order that it was for someone with a peanut allergy. The sandwich came with peanut butter on it.
SHOW TRANSCRIPT

A Boston-area family is suing Panera and a franchise group for putting peanut butter on their daughter's grilled cheese sandwich.

According to The Boston Globe, the 6-year-old-girl has a severe peanut allergy and spent a night in a local hospital after biting into the sandwich.

The lawsuit claims the girl's mother placed an online order Jan. 28, writing twice on it that the sandwich was for someone with a peanut allergy.

Even so, the parents discovered a "large dollop" of peanut butter on the sandwich after the girl bit into it.

The girl's father called the restaurant that night and spoke with the manager, who apologized and said the mistake was due to a "language issue."

But the dad was skeptical. He reportedly asked the manager: "Is this somebody doing this on purpose? Because it's two freakin' tablespoons of peanut butter on this sandwich and it's a grilled cheese."

The family decided to sue Panera and the franchise owner after they learned of a similar incident at another local Panera restaurant owned by the same franchisee. Panera did not reply to the Globe's request for a comment, but one of the franchise operators told the paper, "That doesn't sound feasible."

One in 13 children has a food allergy, according to Food Allergy Research & Education.

This video includes clips from WFXT and WHDH and images from AngryJulieMonday / CC BY 2.0 and Getty Images. Music provided courtesy of APM Music.