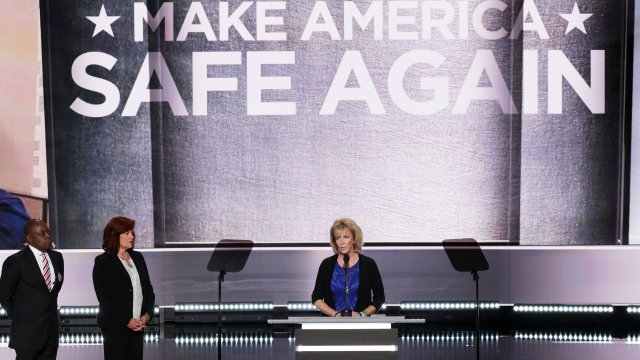 SMS
Parents Of Kids Killed By People Who Illegally Immigrated Speak At RNC
By Lauren Stephenson
By Lauren Stephenson
July 19, 2016
"A vote for Hillary is putting all of our children's lives at risk," one mother said at the convention. "It's time for Donald Trump."
SHOW TRANSCRIPT

"My son's life was stolen at the hands of an illegal alien," said Mary Ann Mendoza, the mother of Sgt. Brendan Mendoza, who was killed in a car crash.

The parents of three Americans killed by people who immigrated illegally to the U.S. pleaded with the nation Monday night to elect Donald Trump.

SEE MORE: Deportation Split Their Families, But This Park Lets Them Reunite

"He was given a misdemeanor and served just 35 days in jail," Sabine Durden said of the man who killed her son, Dominic Durden.

The man who killed Sabine Durden's son in a traffic crash had prior convictions.

"I have been talking about illegal immigration since 2012 since he got killed, and no one listened until Donald Trump," Durden added, calling Trump her "lifesaver."

The theme of night one of the Republican National Convention was "Make America Safe Again," and the parents said they don't believe Hillary Clinton will keep Americans safe.

Donald Trump has been criticized for his stance on immigration, which includes building a wall on the Mexican border. People have protested against Trump's comments, while other have refused to support him because of things he's said, like this:

But Jamiel Shaw, whose son was killed by a gang member who had a deportation hold, said Trump cares.

"The killer's gang targeted black males. You'd think Obama cared and Black Lives Matter? No. And we all know Hillary is Obama's third term," Shaw said of the death of his son, Jamiel Andre Shaw, II. "Trump is sent from God. Support Trump-Pence. Let's come together and make America safe and great again."