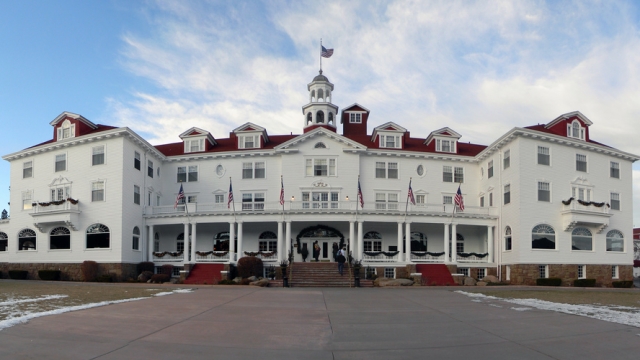 SMS
Paranormal Panorama: Guest Captures Ghostly Figure In 'Shining' Hotel
By Christian Bryant
By Christian Bryant
April 15, 2016
A guest staying at the hotel that inspired Stephen King's "The Shining" snapped a photo of what looks like a ghostly figure in the grand stairwell.
SHOW TRANSCRIPT

If you go to a creepy hotel that inspired a really creepy book and a creepy movie about that book, you're probably going to see some really creepy stuff.

Just ask Henry Yau, the public relations director for a Houston museum. He was staying at the Stanley Hotel, the same hotel that inspired Stephen King's "The Shining."

Yau took a panoramic image of the the lobby and grand stairwell during his stay. He told Fox News he waited until the stairwell was clear to take the photo, but it seems a ghostly guest might've slipped in.

The figure of what looks like a woman can be seen standing at the top of the stairwell.

If that's not creepy enough, a paranormal activity specialist told KUSA: "I immediately saw a second anomaly just to the left of the first figure. ... To the left of her, it looks like what is a child."

According to the hotel's website, the paranormal activity isn't unusual. It reads, "After a century of collecting spirits, the hotel has become renowned by specialists and experts in the field of paranormal investigation as one of the nation's most active sites."

This video includes clips from NBC, Warner Bros. / "The Shining," KUSA, and Paramount Pictures / "Casper the Friendly Ghost." The images are from Brett Levin / CC BY 2.0 and Henry Yau.