Paranoid Drug Traffickers Turn Themselves In After Getting Too High 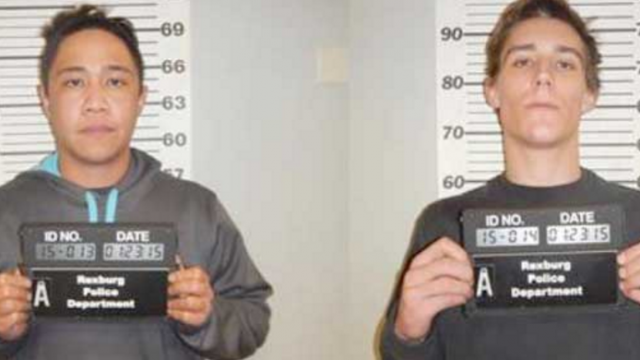 SMS
Paranoid Drug Traffickers Turn Themselves In After Getting Too High
By Jamal Andress
By Jamal Andress
January 21, 2016
Two men delivering 20 pounds of marijuana smoked so much of their own product that they said they had to turn themselves in to Idaho police.
SHOW TRANSCRIPT

As the late great Biggie Smalls once said, "Never get high on your supply." But if you do, try not to call the police.

"We kind of got spooked here trying to bring some stuff across your Idaho border," said Leland Ayala-Doliente, a drug trafficker.

About a year ago, these two guys, Leland Ayala-Doliente and Holland Sward, were driving 20 pounds of marijuana across the Idaho border when they started to believe they were being followed.

"A bunch of your cops driving around in a bunch of civilian cars not wanting to pick us up. I don't know what's the deal. I was just wondering if you could help us out and just end it," Ayala-Doliente said.

Problem is, they weren't being followed. Their hash-induced hallucination made their plea to police an accidental tip.

According to East Idaho News, when police arrived, both men had their hands behind their heads, and 20 pounds of marijuana was sitting in a garbage bag on the side of the highway — a rookie mistake for two low-level criminals who were too high for the job.