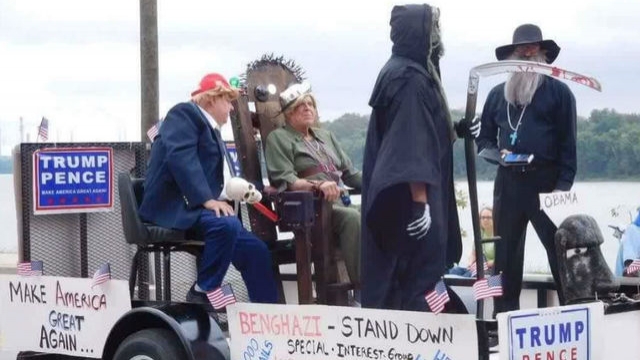 A small town in Indiana is outraged after this shocking float made an appearance in a parade over the weekend.

But its creator told Newsy's partners at WCPO he didn't mean to upset anyone.

"It's all in fun. Laughter is the best medicine in life, and this country needs more laughter. And the people that are offended by it, I'm sorry. Don't come to the parade next time," Frank Linkmeyer said.

The float, which appeared to show Hillary Clinton in an electric chair with Donald Trump getting ready to pull the switch, was one of nearly 200 attractions in this year's Aurora Farmers Fair.

It also included a black Easter Island head along with a sign that read, "President Obama."

"For us to be in 2016 and have our president depicted as an Easter Island statue in blackface doesn't even make any sense, but it's as racist as can be," Aurora resident Jackie Reynolds said.

But this isn't unusual for Linkmeyer. He and his brother have been using their parade floats to poke fun at all kinds of people for years now.

"Police officers, judges, nurses, doctors, heart transplant patients — just a variety of things and the people in Aurora and the surrounding area love to see us in the parade," Linkmeyer said.

In a statement released Monday, the city of Aurora said it is "disappointed" that the float took attention away from an otherwise successful fair.

But it looks like Linkmeyer isn't going to let his critics silence him. He told WCPO he has plans for yet another float in next year's parade.