'Papa Road' Aside, Popes Don't Get Much Love In Video Games 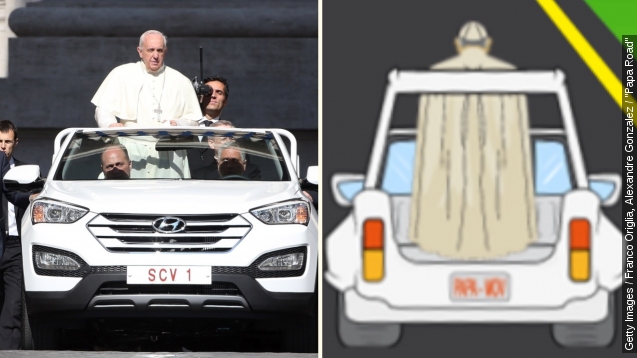 Pope Francis is known to give rides in his popemobile — including to a priest and a 17-year-old boy with Down syndrome.

But now you can drive it, too! At least online. A game called "Papa Road" has players avoiding potholes as they drive the pope's signature transport through Paraguay's capital. Just in time for his visit to the city.

The game doesn't contain any violence — something Francis abhors and his predecessor Pope Benedict XVI called "repulsive" in other video games.

But shouldn't a lack of violence in a papal video game kind of be a given? Well, not exactly. Here are five other video games that feature the Vatican.

First, the most controversial: "Vatican Quest" was created in 2013 and features a Pope Benedict XVI look-alike that players control.

The goal of the game is what's upsetting. Without getting caught, the pope character has to deliver young boys to the Cardinals who then disappear with them.

Soon after its release, petitions demanded the game be taken down, but it's still available online.

Second, the well known "Assassin's Creed II," where the main character has to do — well, what assassins do — inside the Vatican.

Third, in the "Civilization V: Gods and Kings" expansion pack, both the Vatican and Jerusalem are part of the City-States where you can lead your civilization into battle against other groups.

And this one is rated E, for everyone.

In this game, the Vatican sends a bishop to a monastery to recover a sacred item. (Video via SNK / "Koudelka")

And finally, the Vatican is featured in "Shadows on the Vatican, Act I: Greed." James Murphy is an ex-priest who has to uncover a dark secret of the Vatican to help a friend.

Most of these games are rated M, for violence and sexual content. Neither of which will fly with Pope Francis or get you a lift in his popemobile.