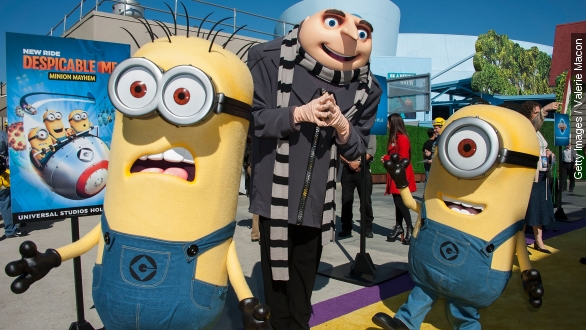 A word of caution for anyone wanting to put Pantone Color Institute's new color on their walls: Don't forget your sunglasses.

Teaming up with Illumination Entertainment, Pantone has created a bright yellow paint color based off the lovable minions from "Despicable Me." Not surprisingly, it's called "Minion Yellow."

As kooky as it sounds, a paint color centered around the yellow creatures makes sense. The minions have helped spawn a huge film franchise, including 2013's "Despicable Me 2" and now, "Minions," which hits theaters in July.

Women's Wear Daily reports the production companies have also teamed up with several London designers to create "Minion"-inspired fashions. Those pieces, some of which cost as much as $800, will hit stores after the film's summer release.

Other films are getting on the co-branding bandwagon, too.

Like Gillette, which jokingly announced it was teaming up with Stark Industries from the "Avengers" franchise to create a line of razors inspired by the superheroes, including Thor and Captain America.

Going back to the paint color, Pantone says it's "designed to represent the sweet and subversive characters. An extroverted hue, it projects playfulness and warmth and is suggestive of intellectual curiosity and enlightenment."

Who knew paint could be so deep?

This video includes music from Deal The Villain / CC BY NC ND 3.0.