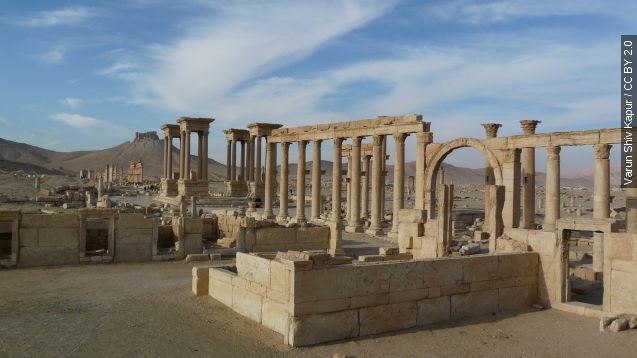 SMS
Palmyra Falls Under ISIS Control, Threatening Ancient Ruins
By Jake Godin
By Jake Godin
May 21, 2015
Palmyra has fallen under ISIS control, setting the extremist group up for possible attacks on both Homs and Damascus and threatening ancient ruins.
SHOW TRANSCRIPT

Palmyra is now in the hands of ISIS. (Video via YouTube / Robert Zysk, Esq.)

The ancient city of Palmyra, and its modern counterpart Tadmur, have both fallen under control of ISIS after a week-long battle with forces loyal to Syrian President Bashar al-Assad.

The loss of both Palmyra and, earlier, Sukhnah to the east is a strategic blow to the Syrian regime, and gives ISIS better access to both the cities of Homs and Syria’s capital, Damascus.

During and after the city’s fall, activists from within the city reported numerous airstrikes made by Assad’s air force.

With the city under ISIS control, the fate of the more-than 2000 year-old ruins of Palmyra remains uncertain.

ISIS regards any ruins used for worship as idolatrous, and has made it a point to publicize their demolition of such ruins in the past as was the case in Nineveh and Hatra in Iraq.

UNESCO Director-General Irina Bokova has said she’s “deeply troubled” by the situation in Palmyra and has called for an immediate ceasefire, but there’s not much else the United Nations agency can do. (Video via UNESCO / NHK)

At the very least, ISIS will likely sell looted artifacts, which it’s been known to do in the past. Though there are reports the Syrian regime removed some artifacts in anticipation of the city’s fall.

According to the Syrian Observatory for Human Rights, the loss means ISIS now controls more than 50% of Syria. The watchdog group also documented the deaths of 462 people within Palmyra and Sukhnah during the clashes between ISIS and regime forces.