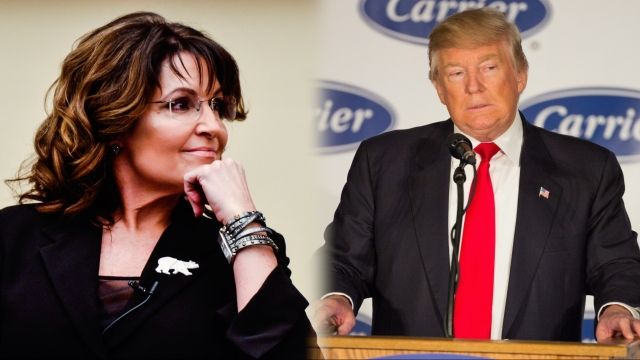 She was one of the first politicians to endorse President-elect Donald Trump, and she's reportedly in the running for a Cabinet post. But that's not stopping former Alaska Gov. Sarah Palin from ripping on Trump's deal with HVAC giant Carrier.

Carrier had announced in February it was moving jobs to Mexico.

Palin does acknowledge that there aren't a ton of details on the deal, which keeps around 800 jobs at the Indiana facility.

But what we do know is it involves incentives for the company — to the tune of $7 million in tax breaks from the state of Indiana.

And that apparently concerns Palin.

She writes, "When government steps in arbitrarily with individual subsidies, favoring one business over others, it sets inconsistent, unfair, illogical precedent. Meanwhile, the invisible hand that best orchestrates a free people's free enterprise system gets amputated. Then, special interests creep in and manipulate markets."

She also writes, "Politicians picking and choosing recipients of corporate welfare is railed against by fiscal conservatives, for it's a hallmark of corruption. And socialism."

In what seems to be an attempt to balance out her pointed language, Palin writes, "Gotta have faith the Trump team knows all this." And she says she'll "be the first" to say her concerns are "unfounded" once more details of the plan are released.

Don't get Palin wrong. She's thrilled for the Carrier employees who will keep their jobs.

"I am ecstatic for Carrier employees! Their bosses just decided to keep shop onshore," she writes. "What a relief for hundreds of workers. Merry Christmas, Indiana!"

But she wants the president-elect to focus on changing policies rather than offering incentives to keep companies in the U.S.

And The Wall Street Journal apparently agrees. It was critical of the deal in an editorial entitled "Trump's Carrier Shakedown," which was also published Friday.