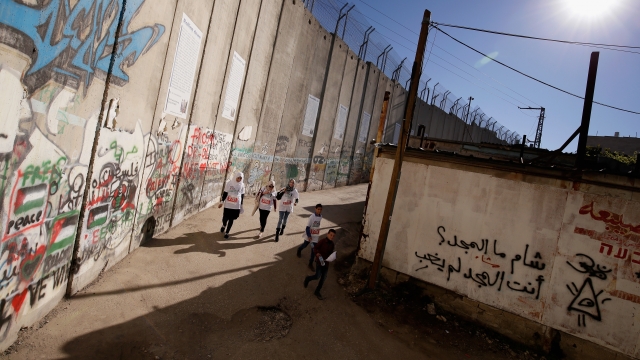 On Thursday, the prime minister of the Palestinian Authority accused Israel of "waging a water war" after a water shortage impacted tens of thousands of people in the West Bank.

Palestinian Authority Prime Minister Rami Hamdallah said, "Israel wants to prevent Palestinians from leading a dignified life and uses its control over our water resources to this end." One nonprofit that focuses on water issues says some places haven't had any water for more than 40 days.

But Israel's national water supplier, which also controls water for the Palestinian territories, says the lack of water is because of of an overall shortage in the West Bank, saying the "capability to supply is less than the rate of consumption." The company denied targeting residents of the West Bank.

A spokesperson for the Israeli government blamed a burst pipeline and said it's since been fixed. That spokesperson also shifted the focus onto Palestinians, saying: "Given the failure to develop infrastructures as a result of the unwillingness on behalf of the Palestinians to convene the Joint Water Committee (JWC), there are problems in the water supply."

But water shortages wouldn't be a new tactic for Israel; the country has limited water for Palestinians in both the West Bank and the Gaza Strip in the past.

A report from Amnesty International slammed Israel's "discriminatory water policies," saying they keep 180,000-200,000 Palestinians from accessing running water. The report also calls out restrictions like the inability to drill new wells without hard-to-get permissions and the control of water collection by Israel "throughout most of the West Bank."

The World Health Organization says the minimum water requirement under most conditions is 7.5 liters per person per day.