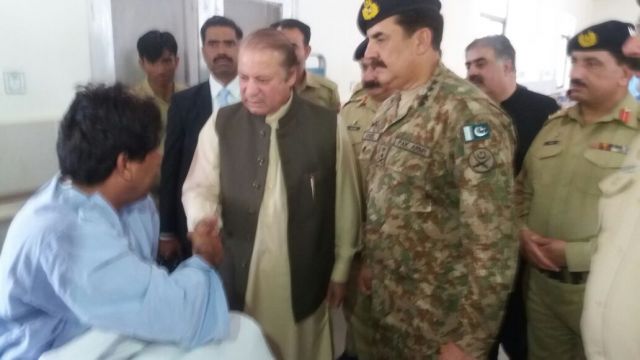 SMS
Pakistani Taliban Group Claims Hospital Bombing That Killed 70
By Matt Picht
By Matt Picht
August 8, 2016
Jamaat-ul-Ahrar says it targeted a group of mourners outside a hospital in the city of Quetta.
SHOW TRANSCRIPT

A Taliban splinter group has claimed responsibility for a deadly explosion at a Pakistani hospital.

The bombing targeted a crowd of people who were gathered outside a hospital in the city of Quetta to mourn the assassination of a prominent lawyer. At least 70 people were killed in the blast, and dozens more were injured.

Jamaat-ul-Ahrar, a breakaway group of the Pakistani Taliban, claimed to be behind both the killing of the lawyer and the hospital bombing. The group has carried out several attacks in the past, including the suicide bombing of an amusement park in Lahore last March.

Many of those killed or wounded in the blast were lawyers, as well. The Pakistan Bar Council has announced a three-day strike in protest of the violence and called on state and local governments to pay compensation to the victims and their families.

The attack took place in the country's western Baluchistan province, which shares a border with Afghanistan and has been plagued by terrorist violence in the past. Pakistan's Prime Minister Nawaz Sharif visited the victims in the hospital.

This video contains music from "CGI Snake" by Chris Zabriskie / CC BY 4.0 and clips from ATV, CBS, PTV News and Twitter / @MaryamNSharif.