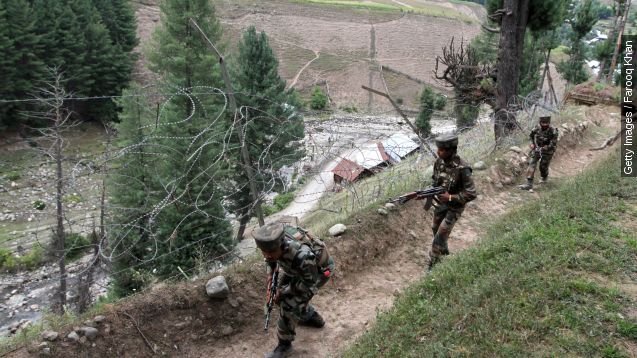 SMS
Pakistan And India's Long History Fighting Over Kashmir
By Jake Godin
By Jake Godin
August 19, 2015
Pakistan and India have feuded over who owns the Kashmir region for more than 60 years, and yet they still don't seem closer to reaching an agreement.
SHOW TRANSCRIPT

Violence is escalating in Kashmir.

Both sides have seen casualties, including civilians, and each side is blaming the other for the violence. (Video via Press TV)

United Nations Secretary-General Ban Ki-moon expressed "serious concern" over the escalating violence. In a statement, he urged Pakistan and India to diplomatically resolve their differences.

Kashmir is a complicated region. Both India and Pakistan claim the land is theirs, a lengthy dispute that has dragged both nations into three wars.

The first, which began in 1947, ended with the creation of a cease-fire line dividing the region into two administrative divisions — one for Pakistan and one for India.

That cease-fire line became the "Line of Control" in 1972, after the most recent major Indian-Pakistani war. Both sides agreed to solve any future disputes over the region diplomatically rather than unilaterally or by force.

And yet small skirmishes continue to crop up over and over again.

An ongoing conflict between India and Kashmiri separatists in the region has further complicated the dispute.

And any progress toward a diplomatic solution between Pakistan and India has been hampered by cooling relations ever since Indian Prime Minister Narendra Modi cut off significant diplomatic talks in 2014.

Still, both nations are due to meet in late August for cabinet-level talks in New Delhi. (Video via NDTV)

Seeing how both Pakistan and India are sitting on their own nuclear arsenals, there’s probably a lot riding on those talks. (Video via Princeton University / Eqbal Ahmad Foundation)

This video includes images from Getty Images and music "Merlot" by Birocratic (http://birocratic.bandcamp.com).