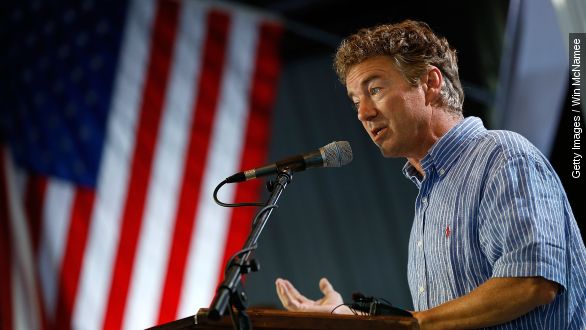 "The Washington machine that gobbles up our freedoms and invades every nook and cranny of our lives must be stopped," Paul said.

Rand Paul made his presidential bid official Tuesday with a pledge to defeat the "Washington machine." (Video via C-SPAN)

That slogan — plastered across his campaign website — is "a subtle contrast to Hillary," says a Paul adviser who spoke with Politico's Mike Allen.

It's all part of an attempt to present him as a Washington outsider, which is a little strange considering the senator works in Washington.

And so, the Paul campaign is playing up his 18-year career as an ophthalmologist.

"The truth is, I love my life as a small-town doctor," Paul said. (Video via C-SPAN)

Hence the personalized eye charts for sale on his campaign website — a website, that by the way, includes few references to "Senator Paul."

Critics aren't sold on the rebranding effort and have pointed to this contradiction.

Even as Rand Paul vows to take on Washington, he doesn't plan on leaving it if the White House thing doesn't work out.

He wants to run for president and for his Senate seat simultaneously, and Kentucky's GOP is probably going to change state election rules to let him do so. (Video via Rand Paul For President)

Potential Republican rival Marco Rubio, on the other hand, has indicated he won't do the same, should he jump into the race — a foregone conclusion at this point.