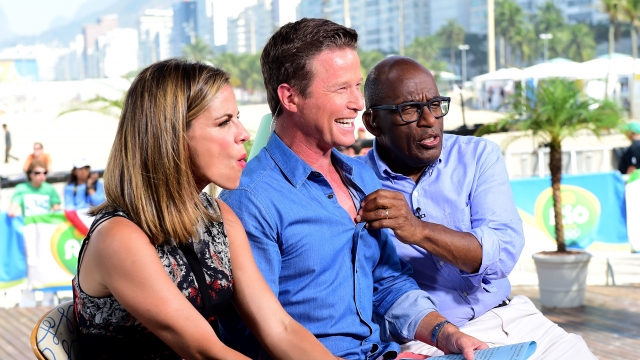 SMS
Page Six Thinks Billy Bush Gets Bullied By The 'Today' Show Anchors
By Newsy Staff
By Newsy Staff
August 16, 2016
Unnamed sources told Page Six the "Today" show co-anchor is being excluded by other members of the cast.
SHOW TRANSCRIPT

And the outlet added Bush's role as an outcast, at least how they see it, may have actually helped him get his exclusive interview with Team USA swimmer Ryan Lochte.

Unnamed sources told Page Six that Bush has been excluded by his NBC co-anchors, and because of that, he's been hanging out with members of "Access Hollywood Live," his old gig.

The network announced Bush's arrival to the "Today" show back in May. He switched spots with longtime anchor Natalie Morales who went out West to take over as co-host of "Access Hollywood."

But hanging with old friends wasn't a bad idea. Bush said on the "Today" show he was hiking with a former "Access Hollywood" co-host when he got his scoop on Lochte being robbed at gunpoint.

Bush said he ended up filming on the street with the help of those who hiked with him, shooting the interview with the swimmer on an iPhone.

But there could very well be no rift among the "Today" show cast. As of Tuesday morning, Page Six seemed to be the only outlet reporting Bush was being excluded.