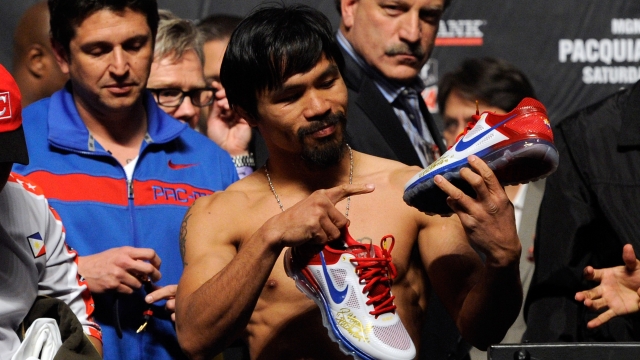 SMS
Pacquiao's Lost Nike Endorsement Makes Him The Latest Celebrity Pariah
By Katie Link
By Katie Link
February 17, 2016
As Manny Pacquiao proves, when celebrities put their foot in their mouth, endorsements and business deals seem to fly out the window.
SHOW TRANSCRIPT

Nike is pulling the plug on boxing champion Manny Pacquiao.

Pacquiao found himself in the crosshairs after calling same-sex couples "worse than animals" in an interview with a TV news show.

The boxer has since apologized, but it seems like "sorry" won’t cut it for Nike. CNN reports the company released a statement that reads in part, "Nike strongly opposes discrimination of any kind and has a long history of supporting and standing up for the rights of the LGBT community."

Pacquiao is just the latest celebrity whose mouth has cost them sponsorship dollars.

Remember when celebrity chef Paula Deen admitted to using racial slurs? Yeah, she lost her show on Food Network and endorsements with Wal-Mart, Target and Home Depot to name a few.

Retired NBA star Tim Hardaway admitted on a radio show back in 2007 that he "hates gay people." He lost his spot as spokesman with a male grooming product line for that statement.

Gilbert Gottfried — comedian and former voice of the Aflac duck — lost his deal with the insurance company after he tweeted some insensitive things about the 2011 earthquake and tsunami that killed thousands in Japan.

And while Donald Trump's inflammatory comments about immigrants haven't necessarily hurt him politically, they have cost him a fair amount of business deals.

The lesson here? Politeness costs nothing, but saying something offensive can sometimes cost a great deal.

This video includes clips from HLN and Paula Deen and images from Getty Images.