Packing Peanuts Could Be Key To Faster-Charging Batteries 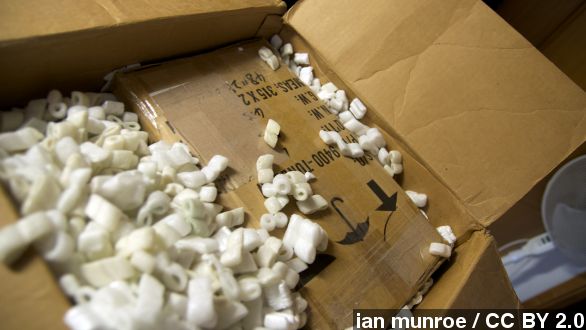 Next time you get a big, heavy package in the mail, you may want to keep those packing peanuts around.

Two Purdue University scientists have now found a way to convert those packing peanuts into fast, rechargeable batteries. By simply baking the packing peanuts at 1,100 degrees Fahrenheit, researchers reduced them to carbon microsheets.

Currently, the anodes of lithium-ion batteries are created from graphite. This new process though could change that.

Lead researcher Vilas Pol says he got the idea when he was setting up a new lab and all the new equipment came with packing peanuts. Only about 10 percent of packing peanuts made in the U.S. are recycled every year.

Most packing peanuts are made of polystyrene foam, known more commonly as Styrofoam. While they're extremely helpful in protecting packages, they can stick around in landfills for more than a century after being thrown away.

There are biodegradable packing peanuts, but packaging company Heritage Pioneer points out they're usually heavier, increasing shipping costs. They can also be pricier to produce.

Now, the researchers hope to scale up their process — something a writer for Engadget says is a very doable.

"It won't be at all shocking if you can one day buy a quick-charging phone and send the packing foam back to help make more phones, rather than throwing it in the trash."

The researchers are presenting their findings at the American Chemical Society conference in Denver this week.