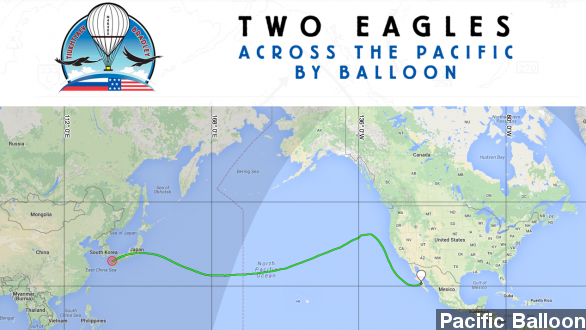 SMS
Pacific Balloon Crossing Unofficially Breaks World Records
By Evan Thomas
By Evan Thomas
January 31, 2015
The crew of Two Eagles looks to have set new records for gas balloon flight duration and distance, but officials have yet to confirm the numbers.
SHOW TRANSCRIPT

Their balloon, Two Eagles, launched from Japan on Sunday, January 18. It made a water landing off the coast of Baja California Saturday afternoon. (Video via KRQE)

This would handily beat previous records for duration — 137 hours in 1978 during the first transatlantic balloon crossing — and distance, when Double Eagle V made a 5,209-mile Pacific crossing in 1981. (Video via YouTube / TwoEagles)

But nothing’s official until the U.S. National Aeronautic Association and the World Air Sports Federation say so. Regulators have to check the data to ensure the new team broke existing records by at least one percent.

In the meantime, the Two Eagles team reports its balloonists are safe aboard a fishing boat and headed to solid ground for the first time in nearly a week.