Oxytocin Is Why Dogs Are Man's Best Friend 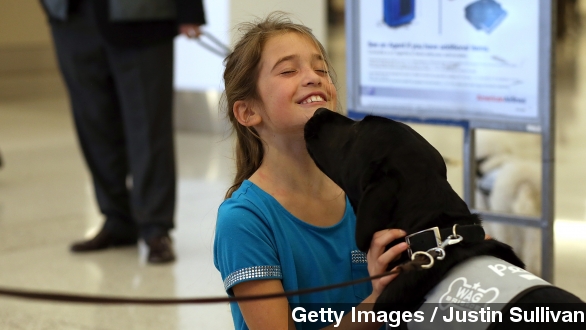 SMS
Oxytocin Is Why Dogs Are Man's Best Friend
By Katherine Biek
By Katherine Biek
March 19, 2015
A new study found dogs that were given oxytocin, popularly called the "love hormone," were better able to read their owners.
SHOW TRANSCRIPT

We know them as man's best friend. And how could we not? Just look at that adorable face.

Well, a new study is saying the reason dogs are man's best friend is because of a hormone called oxytocin.

It's produced in the brain and is why mothers and newborn babies always seem to have that special connection right from the start.

In fact, a writer for Red Orbit reports both dogs and people produce more oxytocin when they're cuddling together for just three minutes. (Video via CBS)

So researchers in Australia wanted to look at how dogs behaved after having their hormone levels increased. They took 62 dogs and gave half of them a nasal spray full of the hormone and a placebo to the other half.

After waiting 45 minutes, the dogs were then put through a series of tests in order to find a hidden treat. The researchers discovered the dogs given the oxytocin outperformed those given the placebo. This outcome remained the same when the same dogs were tested again 15 days later.

The lead researcher told ABC Australia, "This told us that oxytocin is definitely involved in a dog's ability to use human cues."

"Dogs do read their owners' every move. ... With my dogs, they know when I don't feel well, they read your facial expressions. They're so in tune to their human parents," the owner of a doggie daycare, Tania Isenstein, told ABC.

This study is building upon previous research that's looked into the role oxytocin plays in a dog.

The Australian researchers think their findings reveal more about how wolves evolved into domesticated dogs. Next, they want to try the same study on wolves.