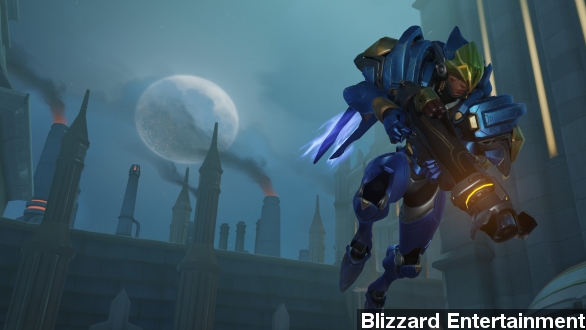 SMS
'Overwatch' Is Blizzard's Long-Awaited Take On Shooters
By Matt Picht
By Matt Picht
November 7, 2014
Blizzard Entertainment has unveiled "Overwatch," a first-person shooter from the company behind "World of Warcraft" and "Starcraft."
SHOW TRANSCRIPT

Video game developer Blizzard Entertainment dropped a bombshell on the first day of the company's annual convention, Blizzcon. The developer behind World of Warcraft and Starcraft entered bold new territory Friday when they announced their first new franchise in almost 18 years.

The game's called Overwatch, and it's a team-based first-person shooter with a diverse cast of different characters, each with different powers and abilities. The game's comic book aesthetic matches its story — a disbanded international league of super heroes fighting amongst themselves in locations across the globe.

The company provided a playable demo at Blizzcon, and a writer for PCWorld says so far, the game looks pretty good. "It's gorgeous, it's as responsive as you'd hope ... and the way the various characters synergize and complement each other is seamless."

So, a team-based FPS with a cartoony aesthetic and different classes. Can't imagine where they got that idea ...

THE SCOUT VIA VALVE: "Do you have any idea, any idea who I am?"

Yeah, comparisons to Valve's Team Fortress 2 were coming thick and fast from the games press. It's an apt comparison, not because Blizzard's ripping off Valve or anything, but because both games feature convoluted development backstories.

Overwatch isn't Blizzard's first stab at a shooter. The new game is haunted by the ghost of, well, Starcraft: Ghost, another Blizzard shooter which was announced in 2002 and then died a gradual, protracted death over the next few years.

At the time, Blizzard CEO Mike Morhaime told Polygon, "We didn't find the passion. We talked about how we put it through a re-evaluation period, and actually, what we re-evaluated is whether that's the game we really wanted to be making. The answer is no."

But apparently, some parts of Titan made it into Overwatch. Joystiq reports a Blizzard exec confirmed to the Blizzcon crowd Overwatch and Titan had "some spiritual continuity. ... Overwatch is its own thing, but they carried over the good ideas for inspiration."

Blizzard hasn't gone into details about pricing, or whether Overwatch will be available for consoles. But the company is planning a closed beta for the game in 2015 — you can sign up for a chance to participate on the game's website.