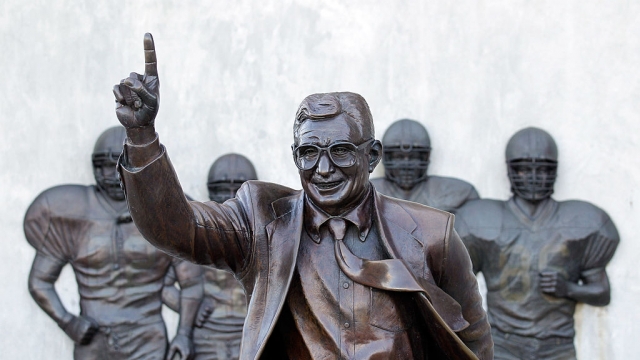 Over 200 former Penn State football players are demanding a statue of former head coach Joe Paterno be returned to its place outside the stadium and that the school apologize to his widow.

The statue was taken down in 2012 due to the Jerry Sandusky scandal. Sandusky, Paterno's defensive coordinator for years, was convicted on dozens of counts of child sex abuse.

Some of Paterno's players say the two-time national championship coach has been treated unfairly. Dozens of Penn State letterman signed a letter to the school that said Paterno was subject to "an underserved media frenzy."

Former Nittany Lions player Brian Masella told ESPN: "Joe Paterno has been cast in a negative light and we're trying to correct that narrative. The university has ignored us over and over again."

But several reports indicated Paterno knew what was going on. After the scandal broke, Penn State commissioned an investigation into how the school dealt with the sexual abuse allegations.

It found that Paterno and other administrators "repeatedly concealed critical facts, relating to Sandusky's child abuse, from the authorities, the board of trustees, Penn State community, and the public at large."

And a court filing from the school’s insurance company said Paterno was informed of abuse allegations in 1976. Sandusky's trial revealed many of the assaults occurred at Penn State facilities and continued until at least 2009.

The university issued a statement thanking players for the letter but didn't say it has any plans to restore the statue.

This video includes clips from NBC and WPMT and images from Getty Images.