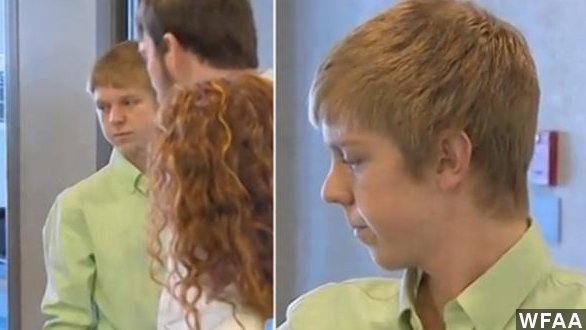 By Steven Sparkman
December 11, 2013
The teen killed four people while driving drunk, but his defense team argued he couldn't be held responsible due to a lifetime of being coddled.
SHOW TRANSCRIPT

There's no end to the Internet outrage after a Texas teen who killed four people appears to have gotten a lenient sentence precisely because he's from a wealthy, privileged family.

"Sixteen-year-old Ethan Couch, who was driving three times over the legal limit for an adult when he killed four strangers, found out that he will likely receive treatment at a high-end rehab facility in California." (Via WFAA)

Police say Couch and his friends stole alcohol from Walmart, got drunk and drove 70 miles per hour in a 40-mile-per-hour zone. They struck two vehicles, killing four people and seriously injuring two more. (Via KTVT)

Police also say Couch's blood alcohol level was at .24 and he had Valium in his system the night of the crash. But the judge's decision to sentence him to 10 years probation instead of prison is ... let's say unpopular. (Via Gawker, The American Conservative)

NANCY GRACE: "Straight probation! He doesn't even have to pick up trash! Nothing! Not one night in jail!" (Via HLN)

Judge Jean Boyd hasn't released a statement explaining her reasons for the lenient sentence, but it's the defense team's unprecedented tactics that are whipping commenters into a frenzy.

"Lawyers for Ethan Couch claimed he wasn't at fault because he had been spoiled by his parents. ... An expert testified that Couch's parents had never held him responsible for previous bad behavior." (Via KHOU)

The expert dubbed Couch's condition "affluenza," a term that blew up on Twitter. It's an inability to make good decisions thanks to a lifetime of coddling.

The irony that Couch's lifetime of getting off easy got him off easy wasn't lost on commenters.

A writer for The Dallas Morning News says: "Despite all the death in his wake, Ethan Couch didn't learn a thing he didn't already know: It's far better to come from that wealthy place where actions seldom have those nasty old consequences."

Incidentally, Judge Boyd has already announced she won't run for re-election when her term ends next year.