Our Favorite New Cars From The Detroit Auto Show 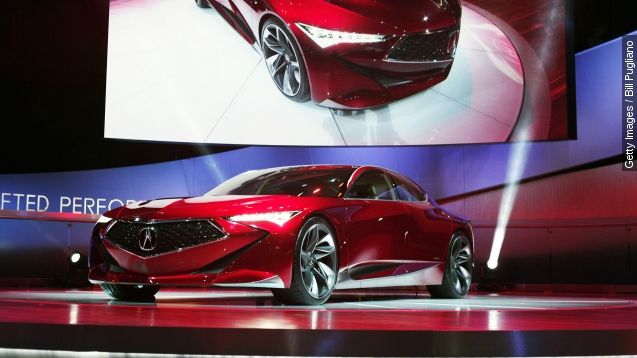 SMS
Our Favorite New Cars From The Detroit Auto Show

By Leah Becerra
January 15, 2016
Even though we didn’t get to attend the Detroit Auto Show, we still got to ogle the sweet new cars that were on display.
SHOW TRANSCRIPT

There were a lot of cars unveiled at the North American International Auto Show, which is probably better known as the Detroit Auto Show. This "Motor City" event is where manufacturers get together every year to show off new concepts and models, while — hopefully — drumming up excitement for their brands.

Here are a few of our favorites from the show floor:

Honda’s luxury brand, Acura, showed off its Precision concept car, and it's a big step from the company’s older, kind-of-stale look. It's actually so different that many are comparing its wide, almost muscular look to a Mazda.

Buick showed off its stylish Avista concept car. Yes, I said Buick and stylish in the same sentence because this car looks good. Even the technology inside the car seems to have been upgraded. See that huge center console display? Yeah, it's a touchscreen, and it totally reminds me of a Tesla.

Moving on, Chevrolet’s 2017 Bolt EV finally showed up this year. The car has a 200-mile range and should be on the market sometime this summer. It's still a small car, but what caught our attention was the crossover-like build and higher roofline. Just because you're driving a small car doesn't mean you should feel like you're sitting in a clown car.

Nissan's luxury brand has a new, more aggressive-looking Infiniti Q60. The 2017 model will be released later this year with a new 3-liter twin-turbo V6 engine, which means it'll have some speed to go with the looks. But it's still a luxury car and will likely be priced like one.

Toyota's luxury arm showed off the 2017 Lexus LC 500. And, as is customary for the company, Lexus balanced comfort, style and power in this new coupe. The four-seater has the company's 10-speed automatic transmission as well as a 5-liter V8 engine. Its release is set for spring 2017.

One more for the road? Sorry, couldn't help myself.

You had to know there was going to be a Porsche in this lineup. Well, here it is. The 911 Turbo got a facelift on the exterior and in the cabin, plus there's a more powerful engine. Powerful enough to get you to 60 mph in 2.9 seconds. The Turbo S version gets you even more power and slices off a tenth of a second from that zero-to-60 time. It's expected to be released sometime this year.