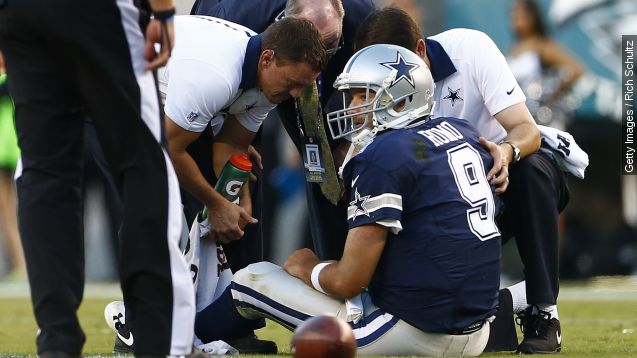 Last year, the Dallas Cowboys enjoyed one of the league's best offenses as quarterback Tony Romo, running back DeMarco Murray and wide receiver Dez Bryant fueled the team to 467 points, putting them in the top five in the NFL. This year, though, things are looking completely different.

"A 20-10 win over the Eagles today, but they pay the steepest of prices. Tony Romo out with a fractured collarbone," KTVT reports.

Romo fractured his collarbone in the third quarter of the Cowboys win Sunday night and could be out for about 10 weeks, adding to an already daunting injury report.

Receiver Dez Bryant, who exited the Cowboys' week-one game with a broken foot, will be sidelined longer than expected after surgery and a bone graft last week. He'll also be out about 10 weeks. (Video via WFAA)

And the Cowboys won't be getting any help from running back DeMarco Murray, either, because he's no longer on the team. After failing to work out a deal with the Cowboys, Murray signed with the Eagles in the offseason. (Video via KDFW)

And, while we're at it, we should mention tight end Jason Witten is a bit beat up after twisting both ankles and a knee in Sunday's win, ESPN reports. Witten, however, played through those injuries. (Video via Fort Worth Star-Telegram)

It's trying times for America's team right now, but at least they're 2-0, right? Here's who the Cowboys do currently have healthy, though.

Quarterback Brandon Weeden will now step into the starting role for Dallas. He went 7-7 when filling in for Romo on Monday.

The team's running-back-by-committee remains unchanged with Joseph Randle and Darren McFadden continuing to split carries, but they've been relatively ineffective. Randle's 3.4 yards per carry and McFadden's 2.9 are far from tops in the league.

On the receiver side, Terrance Williams and Cole Beasley lead the team. Both saw success with Dallas last year, although Williams is the clear-cut No. 1 guy with Bryant out.

The Cowboys have also brought in receiver Brice Butler from the Raiders. He's got good size and speed but has never caught fire with a team and didn't record a catch in Sunday's match.

Like it or not, Cowboys fans, this is the lineup you have to work with for the next few weeks.