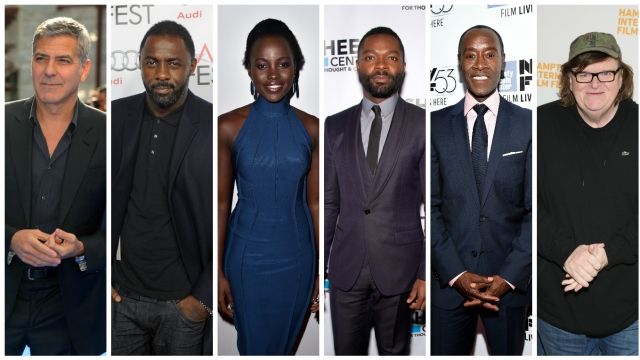 SMS
#OscarsSoWhite Reveals A Problem Stars Say Runs Deeper Than Awards
By Cody LaGrow
By Cody LaGrow
January 20, 2016
Stars are calling for change in Hollywood after some celebrities, citing a lack of diversity in Oscar nominations, have opted to skip the awards.
SHOW TRANSCRIPT

Honorary Oscar recipient Spike Lee isn't angry with the Academy; he's fed up with an entire industry. This morning on ABC's "Good Morning America," the director clarified why he isn't attending the Oscars.

"It goes further than the Academy Awards. It has to go back to the gatekeepers," Lee said.

"Yes, the people who have the green-light vote," Lee responded.

Lee called for reform from top to bottom in Tinseltown, just two days after he announced he won't attend the award show dominated by nominations for white actors. Actress Jada Pinkett Smith shared a similar sentiment.

"Begging for acknowledgment, or even asking, diminishes dignity, and diminishes power. And we are a dignified people," Pinkett Smith said.

Academy President Cheryl Boone Isaacs responded in a statement: "I am both heartbroken and frustrated about the lack of inclusion. This is a difficult but important conversation, and it's time for big changes."

"You have to ask the question, 'Are black people normally playing petty criminals? Are women always the love interest or talking about men? Are gay people always stereotyped? Are disabled people ever seen at all?'" Idris Elba said.

Actor Idris Elba, considered to be snubbed for his role in "Beasts of No Nation," called for more diversity in the media this week. He joins the ranks of Lupita Nyong'o, David Oyelowo, Don Cheadle and Michael Moore — all calling for change within the Academy.

As for the man who sparked the conversation, Spike Lee will opt to attend a New York Knicks game in Madison Square Garden instead of the Oscars — favoring the orange and blue over an event, he said, will be "lily white."