Oscar Pistorius Sentenced To 6 Years In Prison For Girlfriend's Murder 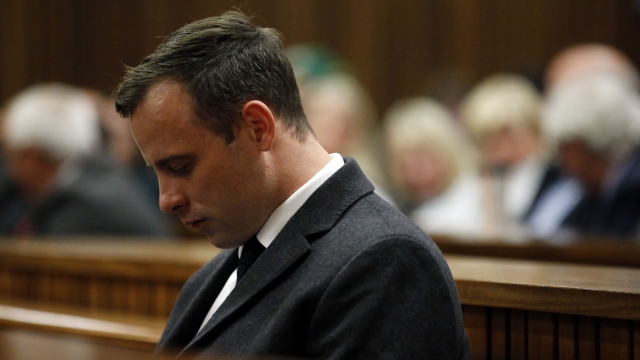 Paralympian Oscar Pistorius is back behind bars — and will likely remain there for some time.

A South African judge sentenced the 29-year-old to six years in prison for killing his girlfriend, Reeva Steenkamp.

Pistorius already spent a year in prison after the same judge convicted him of culpable homicide in 2014.

Prosecutors appealed, and an appeals court ended up convicting Pistorius of a more serious charge — murder — in December 2015.

Pistorius shot Steenkamp through a bathroom door in February 2013. He claimed he thought the person in the bathroom was an intruder.

"He suffers from an anxiety disorder. We know that uncontested evidence that when he was on his stumps, his balance was seriously compromised, and without anything he won't be able to defend himself," defense attorney Barry Roux said during a sentencing hearing last month.

During the sentencing hearing, Steenkamp's father said it's hard for him to forgive Pistorius.

"Oscar has to pay for what he did," Barry Steenkamp said.

In South Africa, the minimum sentence for murder is 15 years in prison. However, the judge decided to give Pistorius a lesser punishment due to mitigating factors. She said he is remorseful and could likely be rehabilitated.

Pistorius must serve at least half of his sentence before he can be eligible for parole.

This video includes clips from CBS and ABC, and images from Getty Images.