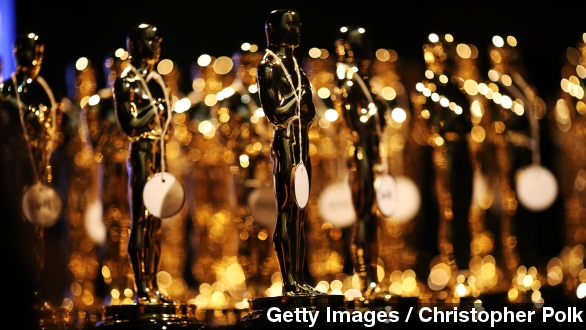 SMS
Oscar-Nominated Films Get Box-Office Boost
By Danny Matteson
By Danny Matteson
January 16, 2015
Every year the Academy Award nominees get a boost at the box office thanks to the hype surrounding the Oscars.
SHOW TRANSCRIPT

It's what every studio wants to hear at the Oscars — their films' name called immediately after this:

"And the Oscar goes to," said Will Smith at the 2014 Academy Awards.

But turns out it's more than just prestige that comes along with that little statuette.

There's also the so-called "Oscars bump": millions of extra dollars expected to be made by films nominated for or winning Academy Awards.

"And finally, we are pleased to announce the films selected as the best picture nominees."

Several nominees for best picture this year — including "Birdman," "American Sniper," and "Whiplash" — will likely see a lot more action at the box office following their nominations.

Mostly that's just to see what everyone is talking about — but it does add up.

As Box Office Mojo notes, Oscar noms for best picture resulted in a little less than an 18 percent box-office increase in 2013. In 2012, it was little more than 32 percent.

And that's just for being nominated. According to Entertainment Weekly, the weekend after "12 Years a Slave" took home best picture in 2014, the film "more than doubled its theater count and boasted a 116 percent increase in earnings."

Of course, as the saying goes, you have to spend money to make money, and with production and advertising costs, making an Academy Award-winning film isn't exactly cheap.

The studio expecting the biggest bump this year will likely be Twentieth Century Fox. Its Fox Searchlight Pictures division was behind "Birdman" and "The Grand Budapest Hotel," both leading the Oscars pack with nine noms apiece.