Right Before Cold And Flu Season, And Florida's Oranges Are Dying 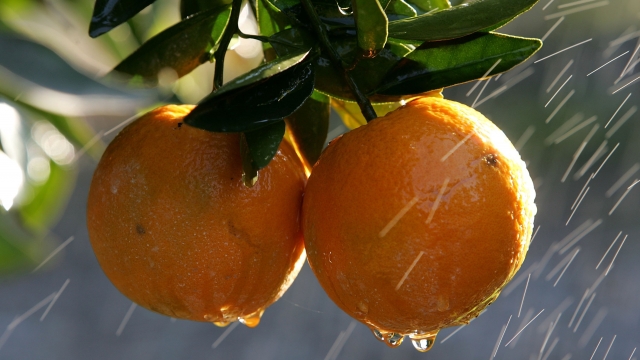 Cold and flu season is approaching, so it's time to stock up on vitamin C — but you might be in trouble if your main source is orange juice.

Florida is having one of the worst orange harvesting seasons in the state's history thanks to hurricanes and bad weather.

SEE MORE: Florida Voters Will Get A Little More Time To Register After All

The U.S. Department of Agriculture predicts the sunshine state will only produce 70 million boxes of oranges this year. And that's a pretty significant drop from last year's reported 81.6 million.

Florida's orange industry hit an all-time peak in 1998, but since then, numbers haven't been so great. And part of that is because of Huanglongbing.

Huanglongbing is a citrus disease that orange trees catch from Asian citrus psyllids. When the bug bites the plant, bacteria overtakes and kills them.

The disease was first detected in Florida in 2005. Since then, orange production has mostly gone down.

And this year, hurricanes have reportedly spread the pathogen across the state. So rather than hiking up prices to make up for a revenue deficiency, orange producers are having to get creative.

Brands like Tropicana and Minute Maid are reportedly making cartons smaller and mixing orange juice with other fruits and water.