Optimism For Libya Could Be Premature 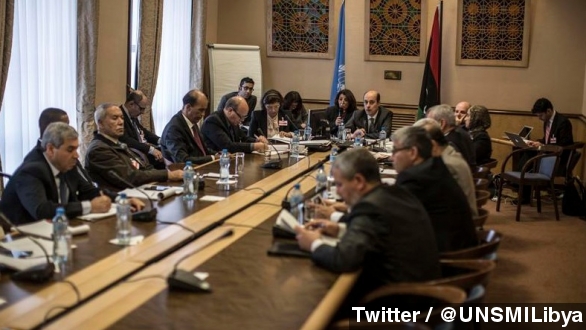 SMS
Optimism For Libya Could Be Premature
By Kate Grumke
By Kate Grumke
January 28, 2015
The U.N.'s envoy to Libya is optimistic about Libyan peace talks, despite the absence of a key rival group.
SHOW TRANSCRIPT

If you ask the U.N.'s envoy to Libya how Libyan peace talks are going, you'll hear words like "constructive spirit," "excellent" and "positive."

"It's a positive work. It's a good exchange between all participants, and I think we are making good progress," said Bernardino Leon, U.N. envoy to Libya.

But we shouldn't necessarily expect an end to the violence in Libya any time soon.

For one thing, the militia group that took over Tripoli last summer didn't attend the U.N.-brokered peace talks in Geneva. (Video via United Nations Support Mission in Libya)

The group is called Libya Dawn and has declared itself the national government. Its leader, Omar al-Hassi, refers to himself as prime minister. He told the BBC he wasn't invited to the talks. (Video via NTDTV)

"Mr. Leon never invited me. I excuse him and I wish him the best," said Al-Hassi.

But some leaders of groups aligned with Libya Dawn are in Geneva. They're negotiating with the Libyan Government the international community actually recognizes.

And Libya Dawn and the official Libyan government managed to agree to a partial ceasefire earlier this month, but it didn't stop the continued violence on the ground. (Video via Al Jazeera)

The pressure to find an agreement is high. The current power vacuum in Libya has left ample space for militant groups loyal to ISIS, like the one claiming responsibility for the attack on a hotel in Tripoli on Tuesday. (Video via Euronews)

The talks in Geneva continued Wednesday, with municipal and local Libyan leaders discussing what they call confidence-building measures.